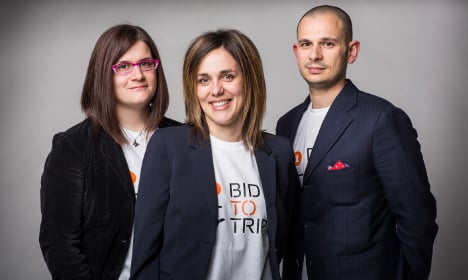 On Bidtotrip, users can bid on luxury holidays and experiences, and because there is no starting price, they can save up to 95 percent of the retail value.

CEO and co-founder Sara Brunelli told The Local she was delighted by the success of her first crowdfunding campaign, though she was initially unsure about the idea.

As well as the financial resources crowdfunding offers companies, she points out that it is also a useful marketing strategy.

“Crowdfunding helps people understand the product, you can talk to people and get their input and suggestions.”

But Bidtotrip’s success might seem bittersweet for the Italian startup scene. Created in September 2014 by Brunelli and co-founders Augusto Grandi and Chiara Fusaroli, all from Emilia-Romagna, the company relocated to London in October in order to connect with English customers.

Brunelli said that because Bidtotrip is focussing on the luxury travel sector, the company needed to be based in a country with a strong economy. She also wanted to reach a greater number of international users, and felt that England was a more strategic location.

“We want to create a company that’s global, and in London it’s possible to have that international vision,” Brunelli explained.

However, she added that Italy has “a good ecosystem of startups”, and credits business consultancy firm CesenaLab, which specializes in helping startups, with assisting them in the early stages.

“They helped us with networking in Italy and gave us advice about the Italian system,” she said.

And despite its success, the startup hasn’t lost touch with its Italian roots. Brunelli explains that currently 80 percent of the site’s users are Italian, and that she is also keen to encourage international customers to travel to Italy.

Bidtotrip offers trips to destinations all over the world, but she said: “It’s easy to market Italy, because we know the destination and the culture well, so it is good for us to work with Italian clients and hoteliers.”