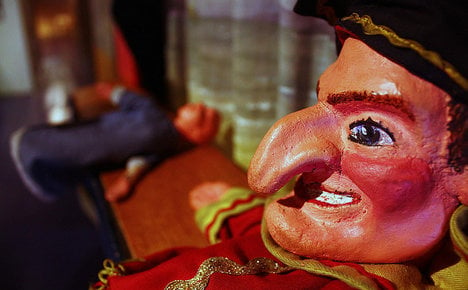 The popular character of Mr Punch was based on a Roman character who was suffering from a glandular disorder. Photo: Tim Kirman/Flickr

Dr Francesco Galassi, who researched a paper set to be published in the European Journal of Internal Medicine this month, argues that Mr Punch and his Italian incarnation, Pulcinella, show signs of suffering from tuberculosis.

“In 1996, the British researcher David Bryson proposed the character of Mr Punch suffering from a disease called acromegaly,” Dr Galassi told The Local.

“But tuberculosis is a disease that would better explain the origins of the character.”

Acromegaly is an abnormal growth caused by an overactive pituitary gland, which had been put forward to explain Punch's hooked nose, prominent forehead and oversized chin.

“People with acromegaly have enlarged hands, but we do not see this in any depictions of Mr Punch. Tuberculosis would better explain the curvature of the spine from which the character clearly suffers.”

Mr Punch made his first appearance in the UK in 1672, when King Charles II patronized a series of performances of Neapolitan puppetry. In the traditional Neapolitan puppet shows, Mr Punch is known as 'Pulcinella', a central character with the same anarchic brand of violent slapstick. But the character of Pulcinella can trace his roots back even further to the character of Macchus in the Roman Atellan fables, a series of vulgar farces which first appeared in Ancient Rome in 391 BC.

“They are the representation of humanities lowest instincts and we see them presented as deformed and ugly.”

But the research Dr Galassi and his colleagues have been carrying out is not about diagnosing artistic figures for fun, as Professor Frank Ruehli from the Institute of Evolutionary Medicine in Zürich explained.

“By looking at paintings and other depictions we can see if a particular disease may have been around or not, and what the medical and social importance of it was.”

Given the lack of medical data across history and considering how under-represented the common man was in a time when only the elite could read and write, representations from folklore offer an interesting mirror in which we can glimpse the ailments of Renaissance Naples and even ancient Rome.

But while the new research suggests tuberculosis, rather than acromegaly, was to blame for Mr Punch's unfortunate features, using physical deformations as a character trope is not a practice that is condemned to the past.

Richard Kiel, famous for portraying Jaws in the James bond films The Spy Who Loved Me and Moonraker, landed a series of roles based on his exaggerated size and facial features, which were brought about by acromegaly.