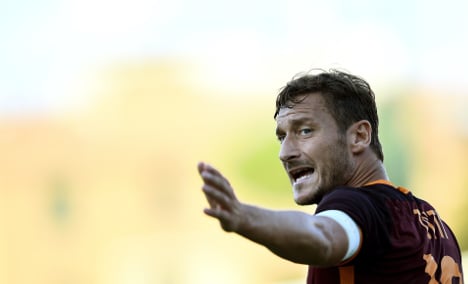 Roma captain Francesco Totti personally paid a team of police officers for two years in a bid to thwart his son being kidnapped. Photo: Filippo Monteforter

Totti, 38, is nearing the end of an impressive career with the 'Giallorossi' but the midfielder's lofty status as 'Il Re di Roma' (the King of Rome) has not been without inconveniences.

Between 2008 and 2010 Totti had to pay for officers to watch over his son amid rumours a hard-line Roma 'ultra' supporter, who had just been released from prison, had been offered €50,000 to kidnap Totti's son, who turned 10 years old last week.

The claims were made by Luca Odevaine, the ex-chief of staff for former Rome Mayor Walter Veltroni, while he was being questioned by police in relation to the 'Mafia Capitale' investigation, which saw 46 accused go on trial in Rome last week.

According to a report in Gazzetta dello Sport, police at the time were unable to confirm the rumours and it was decided Totti pay a team of officers, who were close to retirement age, from his own pocket to guarantee his son's safety.

“One day Vito Scala (Totti's trainer) came to see me and told me that a Roma ultra who had just gotten out of prison told him he had been offered €50,000 to kidnap Totti's son,” Odevaine said in the report.

“He asked me to check. I checked with the then Carabinieri commander Luongo, with the mayor of Rome and with the special branch.

“Given we were dealing only with a rumour, we agreed it would not be appropriate to deploy security services. So it fell to a group of officers who were close to retiring to play a supervisory role outside of working hours.

“Totti paid them himself, giving the money to me before I passed it over.”

The Mafia Capitale trial, which began last week, is focusing on a 46-strong mafia gang whose criminal tentacles reached into almost every department of Rome's City Hall.

The gang are accused of operating a mafia-style network that used extortion, fraud and theft to divert millions of euros destined for public services into their own pockets.