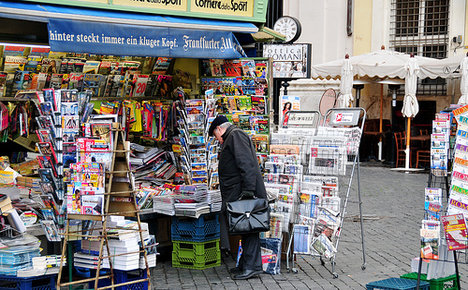 An Italian journalist has reported the national newspaper, Libero, to police over its 'Islamic bastards' headline on Saturday. Photo: Searchenginepeopleblog/Flickr

The headline was splashed on the front page on Saturday morning, leading the newspaper's coverage of the attacks in which at least 129 people, including one Italian, were killed.

Tomaso Notarianni, editor of the online paper PeaceReporter, reported the photo to police after seeing the headline, which he said was “criminal and dangerous”.

“There are laws that regulate the freedom of the press in Italy and they determine limits on inciting hatred,” Notarianni told Il Fatto Quotidiano.

“As far as I'm concerned he has committed a crime – now a judge can decide.”

As an Italian, I express the utmost distance and disdain at the hate exhortation of some compatriots #Libero pic.twitter.com/6pKWQgj5kD

But the editor of the centre-right Libero, Maurizio Belpietro, defended the headline in an editorial on Sunday.

“Not all Muslims are terrorists and not all Catholics are peaceful,” he wrote.

“We didn't say all Muslims were terrorists: we wrote Islamic (adjective) bastards (noun) – the language is clear.”

The headline also came in for widespread criticism across social media, with many Italians expressing their shock at the headline.

But not everyone found the headline distasteful. The Northern League president of Lombardy, Roberto Maroni ,shared a photo of the front page on Saturday morning, saying he felt it was a “perfect summary.”

When contacted by The Local, Libero confirmed that Belpietro was still the editor of the paper but made no further comment about the headline.

It is not clear from Italian reports if police are going to pursue the case, but if they do Belpietro faces fines of up to €5,000 under article 403 of the Italian criminal code.