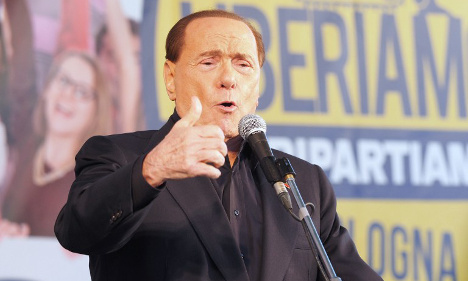 Milan prosecutors, Tiziana Siciliano and Luca Gaglio, have asked that Berlusconi and 30 others be retried after it emerged that he paid witnesses €10 million in the alleged bribery.

Most of the money reportedly went to Karima El Mahroug, the exotic dancer at the centre of the original trial who the 79-year-old was accused of paying to have sex with when she was just 17 years old.

Berlusconi, who is trying to carve a political comeback, was initially found guilty of paying for sex with El Mahroug, nicknamed 'Ruby the Heartstealer'. He was given a seven-year jail sentence in 2013 as well as a life ban from public office, before being acquitted by the supreme court in March this year.

The new case is based on evidence gathered from documents, WhatsApp messages and tapped phone conversations.

Berlusconi is alleged to have paid the money in the period from 2011 to last March in return for the witnesses confirming his testimony that the 'bunga-bunga' parties held in 2010 were actually “elegant dinners”.

He allegedly gave the women cash, gifts, houses, cars, job offers and funded some of their holidays and shopping sprees. But he claims these were gifts made purely out of generosity, because he felt their reputations had been tarnished by the trial.

Berlusconi faces charges of corruption and inducing witnesses to give false testimony.

El Mahroug is said to have been paid between €5 million and €7 million, which the prosecutors claim was partly used to buy a restaurant and two other buildings in Mexico. She is also said to have invested €2 million in Dubai.

Some of the transactions allegedly went through the current account of her ex-boyfriend Luca Risso, who is charged with money laundering.

In May this year, El-Mahroug admitted that she had lied to investigators about the parties, saying she had invented the vast sum of money she was paid and refuting an earlier claim that strippers had “bodily stimulated” Berlusconi.

Now judges must decide whether the new evidence is strong enough to send Berlusconi to trial.

If the claims do go to court, it could prove to be a huge political setback for the billionaire, whose Forza Italia party is currently ranked fourth in the polls.