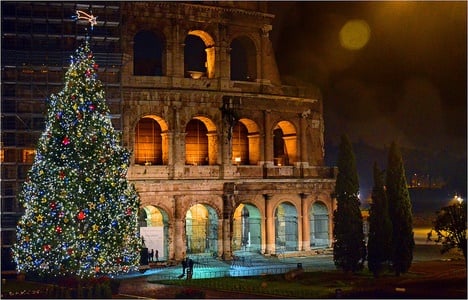 Feast Day of the Immaculate Conception

What? To commemorate this national holiday there are celebrations throughout Italy, while churches hold special masses. Typical festivities consist of parades, feasts and music in many places. In the Abruzzo region, usual celebrations involve bonfires and traditional singing. Rome celebrates with floral wreaths and a ceremony at the Spanish Steps overseen by Pope Francis. When? First week of December

What? As Italy strives to tackle the growing wild boar population, the medieval Tuscan town of Suvereto, near Livorno, celebrates the animal which forms a staple part of regional dishes by way a festival each year. Alongside wild boar dishes, the 10-day event is also a celebration of other local products, including wine, olive oil and honey. Locals dress up in medieval costume, and the festival includes a number of medieval competitions, usually culminating in a big party on the last day. How much? The cost to take part ranges from €35 to €70, depending on when you sign up

What? Starting and finishing by the famous leaning tower, this is a unique opportunity to experience the wonders of the city whilst cheering on determined athletes. To get into the Christmas spirit there will also 'La Corsa dei Babbi Natale', which is basically a race among people dressed as Santa, so it's the perfect event for all the family. If you don't feel up for the full 42.1km marathon, then there is also a half marathon. What? One of the most anticipated fairs in Milan this December, L’Artigiano in Fiera will display a spectrum of handmade crafts from Italy and around the world. With stalls selling everything including jewellery, art, furniture, clothing and food, you’re bound to find something that takes your fancy. The event is being held at Fiera Milano on Strada Statale Sempione, and will be open each day from 10am until 10.30pm.

What? Showcasing not only the finest ice cream in the world, but also the newest machinery and technological innovation in the sector, the International Ice Cream Exhibition in Belluno, in the Veneto province, demonstrates the best ice cream in the industry. With operators from fifty countries showcasing contemporary design and skill, this event is truly unique. What? This wonderland experience, far away from the Alps, incorporates a range of indoor winter sports such as ice skating, dry skiing and snow tubing, an activity which involves riding down a slope on inflatables. The park also presents the opportunity to play a new sport called “broomball”, similar to hockey but instead of skating, teams run on the ice using specially designed shoes. If you can’t wait to run around the rink, or prefer to watch from the side lines, this wintry event has something for everyone.

What? The theme for the upcoming Catholic Holy Year, or Jubilee, is mercy. The year-long event begins with the opening of the Holy Door of Saint Peter’s Basilica in Rome although the occasion will also celebrated in all local churches. If you happen to be in Rome, don’t miss the chance to see the start of the event on December 8th. What? Celebrating its 42nd anniversary, the Umbria Jazz Festival comes to Orvieto again this December to honour the best performers of Italian and international jazz. With performances from Vincent Van Hessen, the Larry Franco Quartet and many more, this event is the perfect way to wind down after Christmas festivities.

The Biggest Christmas Tree in the World What? Entering the Guinness World Records in 1991 as the 'Biggest Christmas Tree in the World' there is no better way to start the festive season than by witnessing this tree in Gubbio, a town in the Perugia province, which is dressed with thousands of coloured lights. Formed at the base of Mount Ingino and taking over 2000 working hours to erect, the result is truly worth the wait.

What? Celebrated in the Sicilian town of Paternò on the slopes of Mount Etna, there is a religious ceremony and procession to honour Santa Barbara, the town’s patron saint. The festival encompasses a variety of sport and music events, with the celebrations concluding in a dramatic fireworks display. After this there is a parade and then the city’s nativity scene is erected, making this event the perfect way to start the Christmas season.