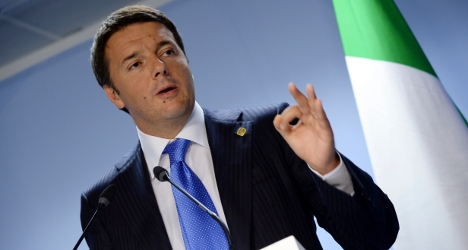 Premier Matteo Renzi said Italy would not be joining its EU counterparts in air strikes against Isis militants in Syria. Photo: Thierry Charler/AFP

Renzi has been under pressure from centre-right opponents to follow in the footsteps of the UK, Germany and France to join the US-led coalition.

But on Sunday, he told Corriere: “If leadership means playing at chasing others’ bombardments, then I say ‘no thanks’.”

His comments came after both Germany and the UK voted last week to join the air strikes in the wake of November 13th Paris attacks, in which 130 people died.

“Italy has already given: we used this strategy in Libya in 2011, we surrendered to the position of Nicolas Sarkozy [then the French President]. Four years of civil war in Libya shows that it wasn’t a good choice. Today we need a different strategy.”

Renzi added that Italy has “more troops abroad than anyone else, after the US and the same as France”, and that the country was leading missions in Afghanistan, Kosovo, Somalia and Iraq.

He said last week that Italian troops would remain in Afghanistan through next year.

Renzi also said that while he has “great respect” for Francois Hollande, the French leader is “driving a wounded France”.

“Answers need to be given, but this must start internally,” he added.

“We want to widen the reflection; fight terrorism while asking ourselves what the role of Europe is today. It’s our duty to step up the fight against Isis, and discuss how. We mustn’t forget that the [Paris] attacks were planned in the suburbs of European cities: we need an internal response.”