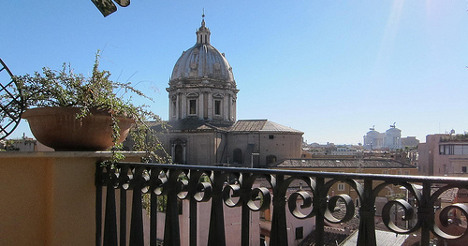 Hotel bookings for the start of the Jubilee have been weak. Photo: Hannah Webb

The Mercy-themed Jubilee is a time for wayward Catholics to seek forgiveness for their sins.

It is also an immense money-spinner for the Vatican and Rome as thousands of pilgrims are expected to descend on the capital.

But the event, due to begin on Tuesday, has not proved fruitful for hoteliers so far, forcing them to cut room prices over the past week amid weak bookings.

Bookings have been subdued since the November terror attacks in Paris, Maurizio, who manages Hotel Trevi in Rome’s centre, told The Local.

“The hotel is almost full for tonight, but over the next few days we have half the number of guests,” he said.

“We’ve noticed there are a lot less Italians staying compared to last year: we have 100 rooms, and right now 98 of those have foreigners staying in them, mostly Spanish. We hope that things pick up once the Jubilee gets started.”

Bernabo Bocca, the head of the hotel industry association, Federalberghi, told La Stampa that hotel occupancy was down 20 percent from this time last year.

Luigi, who works at the four-star Hotel Accademia, near the Trevi Fountain, said the hotel was completely full during the same period in 2014.

“I think it’s mainly because fewer Italians are travelling,” he told The Local.

“There has been a drop in bookings here too since the Paris attacks, and we've cut prices. But advance bookings are looking Ok.”

Italian security forces have been put on high alert due to fears of jihadist attacks since the Paris attacks.

The FBI also warned in November that St Peter's cathedral could be a terrorist target.

A no-fly zone applying to drones as well as regular aircraft has been declared above the capital during the Jubilee, which ends on November 20th 2016.