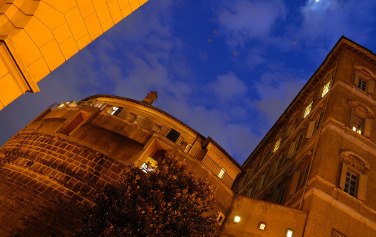 The Vatican bank is once again under scrutiny. Photo: Gabriel Buoys/AFP

In its latest update on the Holy See's efforts to clean up its murky finances, the Council of Europe 's Moneyval committee concludes that the Vatican has, in the last three years, addressed most of the structural weaknesses at the Institute for Religious Works (IOR), the official title of the bank.

But it voiced surprise that no indictments or prosecutions had been launched, despite some 4,800 suspect accounts having been closed down since 2012, some 30 reports handed to prosecutors and 29 money laundering investigations launched since 2010 and €11 million ($12 million) in funds frozen.

“There is a need now for the anti-money laundering and counter terrorist financing system to deliver effective results in terms of prosecutions, convictions and confiscation,” Moneyval said in a statement.

Council of Europe secretary general Thorbjorn Jagland welcomed the Vatican's progress but added: “I urge its authorities to take into account Moneyval's recommendations and to deliver some real results in the money laundering investigations being conducted.”

Moneyval's call came as the Vatican faces criticism for pursuing the prosecution of three former officials and two journalists over the leaking of classified documents which detail irregularities, extravagance and mismanagement in Church spending.

The trial, in which the defendants face prison terms of up to eight years, is due to resume in the New Year with one of the accused, a Spanish priest, currently detained in a Vatican cell.

The Vatican first submitted itself to the Moneyval evaluation procedure five years ago in a bid to draw a line under serial scandals linked to the IOR.

The most famous of these centred on the 1982 death of Italian banker Roberto Calvi, whose corpse was discovered hanging from Blackfriars Bridge in London in what prosecutors believe was a mafia killing linked to money laundering via the Vatican bank.

It emerged 30 years after Calvi's death that the Vatican still had no idea of the identity of thousands of IOR account holders and that some accounts were held by people with no apparent connection to the Church or its charitable works.

Others contained secret slush funds used for off-the-books spending by Vatican departments, according to books published recently by the two journalists currently on trial.

Moneyval said an internal review of the accounts, which has accelerated under Pope Francis, “appears to have been a success”.

The Church's own Financial Intelligence Authority (FIA) carried out a full inspection of the IOR in 2014 and drew up a remedial action plan which was now being followed up closely, it said.

It was more equivocal about progress on the Administration of the Patrimony of the Holy See (APSA), the body which manages billions of euros worth of real estate and stocks owned by the Church, saying some ad hoc inspections had taken place and that a full evaluation was due to be completed by the end of the year.

Two IOR accounts closed down in 2013 were held in the name of a former senior APSA official, Nunzio Scarano, who is now on trial for money laundering in Italy.

Dubbed “Monsignor 500” by the Italian press because of his alleged fondness for doing business in €500 notes, Scarano is accused of trying to smuggle €20 million from Switzerland into Italy.

The Vatican has launched two separate probes into suspected past criminal activity at APSA but there has been no indication of either case coming to trial.

Moneyval recommended that the Vatican City authorities should ensure that the micro-state's police and judicial systems had the capacity to handle complex investigations and bring cases to court. The Holy See was asked to issue an update on progress by December 2017.

Most observers say Francis has actively pushed efforts to clean up Church finances, notably by abolishing banking secrecy obstacles to the probe of the IOR and by putting a lay expert on financial crime, Swiss Lawyer Rene Brulhart, in charge of the FIA.