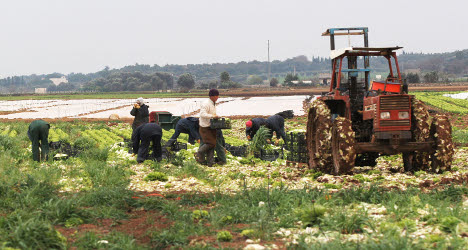 Even though the vast majority live legally in Italy, “86 percent of agricultural workers don't have a work contract”, Doctors for Human Rights (Medu) said in a statement, a figure that has remained stable for years.

Medu, which runs a mobile clinic in southwest Italy's Calabria region, said it has found that “with regards to living conditions, the situation this year is also very dramatic.

“Forty-five percent of seasonal workers sleep on mattresses on the ground while 18 percent sleep directly on the ground in structures deprived of water, light and hygiene services.”

The labourers concerned are mainly from Mali, Senegal, Burkina Faso, Ivory Coast and the Gambia. Some 89 percent are under 35 years old.

Most of the health problems Medu staff have found are “directly linked to the dire living and working conditions,” the group said.

Migrant workers are paid “30 to 50 percent less than the rate set by contracts in the province,” the charity said, calling on authorities to “immediately implement measures” to ensure the exploitation ends.

Matteo Renzi's government, which has promised to step up controls, last year launched a system of ethical certification for the sector.

Of the 669 farms that requested the certification, only 227 received it, according to figures released by agriculture unions.