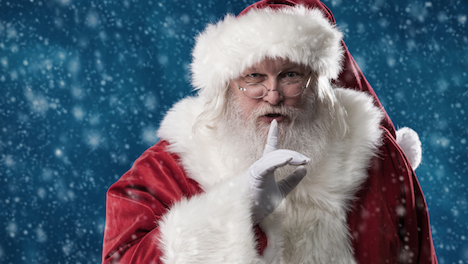 A priest's decision to tell children that Father Christmas did not exists led to protests in one Italian town. Photo: Niklas Hallen/AFP

Wearing the garb of Santa's helpers, the miffed parents filled the central square in the picturesque town of Antey-St-André, in the Aosta Valley region.

They sought the signatures of parents in the town for a petition asking the region's bishop to reconsider the role of Father Zibigniew in wake of his inappropriate teachings to their children at Sunday school. The picturesque town of Antey-St-André lies under the shadow of the Matterhorn in northern Italy. Photo: Mimma. P/Flickr

“Sooner or later all children bitterly discover that Father Christmas doesn't exist and that gifts aren't bought by a magic sleigh pulled by reindeer but by mum and dad,” a parent told La Stampa.

In addition to debunking the Santa myth, Father Zibigniew also allegedly told children that not going to mass was a mortal sin and that they should give any pocket money they receive for sweets to the parish.

But for the parents of Antey-St-André, revealing the non-existence of Father Christmas was a step to far.

“It's not right to destroy childrens' dreams and it's not their place to do so,” Davide Li Veli, one of the parents who organized the protest explained. “We're sorry that adults have forgotten the importance of this figure to children.”

But amid the protest, the parish defended the actions of Father Zibigniew, explaining that the priest's Italian was not good enough and suggesting his message had been lost in translation.

“I think the problem was caused by the Polish minister's poor Italian, which makes it difficult to express some concepts clearly,” another parish priest, Marco Poletto, said, adding that “even his prayers are sometimes incomprehensible”.

“We tell children to believe in the magic of Christmas. We explain that Father Christmas is a figure present in many cultures around the world, all of which stem from Saint Nicholas – the Bishop of Myra.”