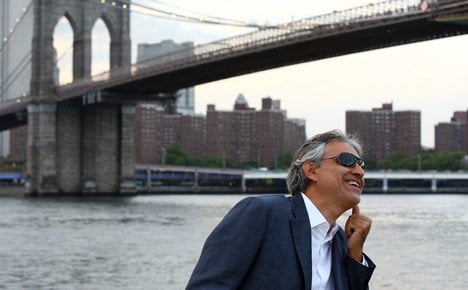 After hearing about the tough conditions New York's thousands of  homeless face each day, the top-selling artist took to Times Square with an acoustic guitar to perform a mini-unplugged concert for a homeless charity.

Crowds of stunned passers-by stopped to listen as Bocelli belted out the traditional Italian song 'Mamma son tanto felice'. Some members of the crowd filmed the rendition on their mobile phones and a version of the video was uploaded to the internet on Sunday.

Bocelli's impressive vocals helped to raise over $500 in just a few short minutes, which he gave to a homeless charity along with a personal donation from his own pocket.

The singer is renowned for his philanthropic and charitable work, which he carries out through his own foundation. But he is also known to make impromptu musical gestures.

In August, the singer surprised two newlyweds by popping into the church where they were getting married to sing 'Ave Maria'.

Bocelli has sold over 150 million records worldwide and is the best selling classical crossover artist of all time.

According to NGO Coalition for the Homeless there were an estimated 59,568 homeless people sleeping in shelters across New York in October 2015.