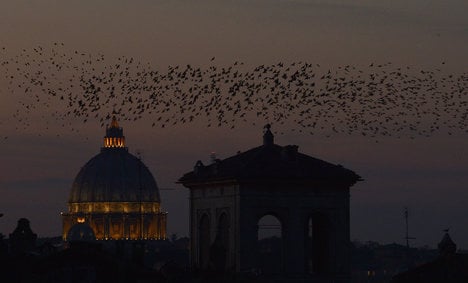 The droppings of millions of migratory starlings have made for some slippery roads in Rome following rainfall. Photo: Tiziana Fabi/AFP

The downpours that cleaned up the air and brought levels of fine particles back down below a World Health Organisation-recommended threshold also cleansed the city's trees of several weeks worth of guano deposited by millions of migratory starlings.

The result, in combination with rotting leaves, was a slippery, slimy fungal mush that forced city authorities to close roads on the banks of the Tiber for most of Saturday while refuse workers attempted to hose the streets back into a safe state.

Starlings swarming above Rome's historic buildings are one of the iconic sights of the capital, but dealing with their excrement is a perennial problem for the cash-strapped city.

This season, efforts to stop them congregating in the plane trees lining the Tiber got a late start because of cutbacks.

The usual method is to broadcast recordings of the screeching sound starlings themselves make to warn of the presence of a bird of prey.

Real hawks were also deployed on an experimental basis, with limited success before the project was thwarted by the long dry spell that sent pollution levels soaring.

The starlings' excrement creates a particularly slick mess because the little black birds spend their time in Italy gorging on olives on the outskirts of the Eternal City.

In the manner of tourists enjoying a good lunch in the country, they then return to the city centre as night falls, lured by warmer temperatures and the bright lights.