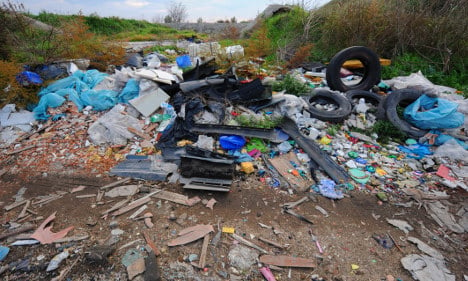 Tyres, plastic and toxic waste are left strewn on the sides of an agriculture field near Orta di Atella, one of the villages inside the so-called 'Land of Fires', where the local mafia created hundred

Some 55 municipalities in the so-called 'Land of Fires' in the southern Campania region, where the Camorra mafia group has created hundreds of illegal rubbish dumps, suffered disproportionately high rates of cancer, the study by Italy's National Institute of Health found.

The report, released on December 30th, was mandated by the government as a follow-up to an initial report in 2014.

In particular, it drew attention to the health problems among children, saying it was “critical” that the government do something about the high rate of babies being hospitalized in their first year for tumours – especially brain tumours.

The report linked the high cancer rate in the area to “verified or suspected exposure to a combination of environmental contaminants which can be emitted or released from illegal hazardous waste dump sites”.

The findings do not come as news to the residents of the area, who for years have been campaigning for the government to act against the waste dumps, but it is the first time the health risk of living near the toxic waste dumps has been scientifically proven.

In Avvenire, the newspaper of the Italian bishops' conference, local priest Maurizio Patriciello wrote about the need for authorities to act following the report.

He stated that the waste “is wiping out a population” and that residents have “done what they can” to warn authorities, including protests, photographing and filming the dumps and working with authorities and politicians. Leaders have been slow to act because no link to cancer deaths had been proven, Patriciello argued.

“We were right,” said Patriciello. “But can we claim victory? Absolutely not. In this shameful, sad and painful story, we have all lost. The government above all. Now [the problem] needs to be taken seriously. And urgently.”

Few other Italian newspapers wrote about the report's findings.

In January 2014, the Italian government decided to send in the army to deal with the problem “in the most efficient manner”  and premier Matteo Renzi introduced a slew of new measures, including testing farmland for contamination and withdrawing produce grown on contaminated lands from the market in February of the same year.

But it seems these measures have been ineffective; in July last year Italy was hit by a €20 million fine from the European Court of Justice for failing to resolve the problem.