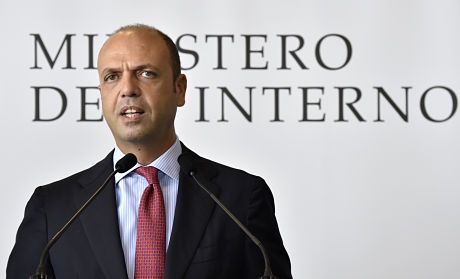 Angelino Alfano's comments sparked outrage amongst gay rights groups and other supporters of legal recognition and protection for same sex couples, an area in which Italy lags behind its European neighbours.

Alfano, the leader of the New Centre Right (NCD) party, the junior partner in Prime Minister Matteo Renzi's coalition government, won backing for his stance from conservative politicians and leaders of the Catholic church in Italy.

The row erupted as the Italian parliament prepares to debate a bill on civil unions which Renzi promised to make a priority after taking over as premier in February 2014.

Draft legislation includes provision for lesbians and gay men who enter into civil unions to adopt their partners' children – a clause that has been opposed by the NCD and others, slowing the bill's progress through parliament.

Italian law already prevents couples from using a surrogate mother in any circumstances.

In theory, anyone caught entering into a surrogacy arrangement faces up to two years in prison and a fine of up to a million euros.

Alfano's proposals to upgrade the gravity of the offence would mean much harsher penalties: sex crimes are liable for jail sentences of between five and 14 years under the Italian penal code.

In an interview with Catholic weekly Avvenire, the minister said the clause, for which the English term “stepchild adoption” is widely used, “risks bringing the country closer to wombs-for-rent, towards the most vile, illegal trade that man has invented.”

He then added: “We want wombs-for-rent to become a universal crime, which is punished with a jail term. Just as happens for sex crimes.”

The minister did not elaborate on how the concept of “wombs-for-rent” would be defined.

Legislating to allow surrogacy but preventing women doing it as a source of income has proved tricky in other countries, notably because of the difficulty in distinguishing between reasonable compensation for a woman's time and medical expenses and sums that could constitute an incentive to enter into the arrangement.

Emma Bonino, a former minister and European commissioner who is one of Italy's most prominent feminists, said Alfano's proposals would simply result in couples going overseas to find surrogate mothers if there was no other way they could have a child.

“Mr Alfano should reflect on the fact that saying, 'I would not do it' must never become 'therefore nobody should do it',” Bonino said.

But Edoardo Menichelli, the Archbishop of Ancona, welcomed Alfano's stance, describing surrogacy as “a degrading practice for women who are reduced to being the incubator for the desires of others.”

The 76-year-old cardinal added: “To have a child is not a right, we believe. As Pope Francis says, every child who comes into this world has the right to grow up in a family with a father and a mother.”

Gay rights groups accused Alfano of sowing confusion between surrogacy and adoption rights in bad faith in a bid to capsize the civil unions bill.

“Either the minister does not know the Italian law or he is speculating at the expense of children, which is something really vile,” said a statement issued by the Luca Coscioni association and two other groups.

Italy was condemned last year by the European Court of Human Rights for failing to offer adequate legal safeguards to same sex couples.

Parliament is due to begin debating the civil unions bill at the end of January. Renzi is expected ultimately to get the bill through, but that may not be the end of debate, with Alfano having pledged to campaign for a ratifying referendum if the adoption clause is enacted.

Opinion polls suggest a majority of voters back civil unions but are more evenly split on the adoption issue. Support for civil unions increased significantly after Ireland, one of the few countries with as strong a Catholic heritage as Italy, voted decisively in favour of gay marriage last year.