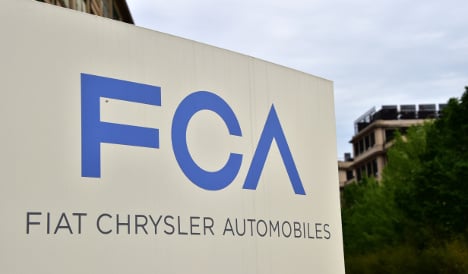 “While the lawsuit has not yet been served on FCA US, the company believes that the claim is without merit and was filed by internal counsel to the dealer group as FCA US has concurrently been discussing with the dealer group the need to meet its obligations under some of its dealer agreements,” FCA said in a statement emailed to AFP.

Shares in car giant Fiat Chrysler Automobiles lost more than 10 percent of their value in Milan on Thursday after a report it had conspired to inflate its US sales figures.

The slump came after Automotive News reported on its website that two Chicago salesmen had initiated a legal suit which claims the company had offered dealers cash to pretend they had sold more cars than they actually had.

In mid-day trading, FCA shares were changing hands at €6.63, down 10.77 percent in comparison to a fall of around 2.5 percent in Milan's main indice.

FCA announced on January 5th that it had sold a record number of vehicles in December thanks to strong demand for its Jeep sports utility vehicles. Its US sales for 2015 were reported at two million vehicles, a rise of seven percent on the previous year.

The suit suggests that falsifying the figures may have helped FCA to post increased year-on-year sales for a rival-beating 69 consecutive months.

Automotive News said this streak had been touted by the company's high-profile CEO, Sergio Marchionne, at the Detroit auto show this week.

The suit is reportedly being brought by two dealerships in the Napleton Automotive Group. It claims one of FCA's managers offered executive Edward Napleton $20,000 “to falsely report the sales of 40 new vehicles” at the end of an unspecified month.

It alleges dealers who agreed to do this would then be instructed to unwind the sales on the following business day before the factory warranty on the vehicles could be processed and start to run, according to Automative News.