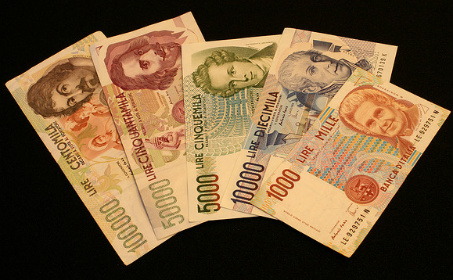 A Italian woman has been told she can exchange 15 million lire she found in a second-hand chest of draws for euro. Photo: Bitznbitez/Flickr

The old Italian currency notes were found stashed in a secret compartment inside a second-hand chest of draws she bought on the online auction site, eBay.

Viola Colombo, from Vercelli in Piedmont, brought the chest draws for her home in Venice on last September, paying just a few euros for it.

But the 50-year-old was shocked to find a hidden “false-bottom” compartment under one of the draws, Corriere del Veneto reported.

She was even more shocked when she found the princely sum of 15 million lire, in 100,000 lire notes, hidden within the secret chamber. The money had clearly been stashed before 2002, when Italy joined the single currency.

It is not known to whom the money originally belonged, but the sum amounts to €7,746 in today's money.

Given its worth, Colombo went to Italy's central bank, Banca d'Italia, to try and exchange it.

But the bank refused to convert the cash, explaining that Italy had established a ten-year time limit, for the exchange of lire into euros.

That timeframe expired on December 6th 2011 after only 9 years and 9 months, thanks to an emergency decree passed by the technocratic government of Mario Monti in an attempt to avert a financial meltdown in Italy.

Not wanting to give up on her unexpected windfall, Colombo employed the help of consumer rights' group Agitalia to help overturn the bank's decision.

After appealing to the constitutional court in January, Colombo was told that she would, in fact, be allowed to convert her stash of lire to modern money – thanks to a temporary re-opening of the lire exchange window.

“The constitutional court overturned the Monti decree in November 2015,” a spokesperson from Agitalia told Corriere del Veneto. The ban was lifted to give all Italians with lire the extra three months they lost when the decree was passed.

Italy's laws for exchanging old currency would seem exceptionally rigid compared to the rest of the EU. In Germany, Ireland and a seven other eurozone countries, no time limit governs when old currency can be converted.

In which case, it might be worth checking your furniture for hidden compartments before the new deadline expires in February: experts say there is up to €1.3 billion in lire still out there.