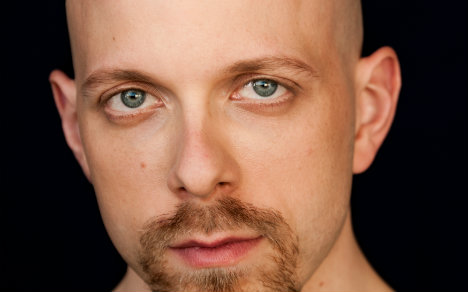 “Three years ago I was editing Latin textbooks for Italian school kids in Bologna which was very boring,”  Cupani told The Local.

“So I quit my job and enrolled at a drama school in Bologna where I was the oldest person in my class. After I finished my year-long diploma I decided to go to London to begin a new career as an actor.”

But shortly after arriving in the British capital, Luca's hopes were dashed when he was refused parts because of his heavily-accented English and highly unconventional appearance.

“I have a strong Italian accent and don't I speak perfect English so finding parts was really difficult,” explained Cupani.

“I still thought I would be able to play Italian roles but people generally people want Latin-looking people with a dark complexion…they all thought I looked Polish.”

With his UK acting career stuck in a rut, Cupani was encouraged to try his hand at stand-up comedy by his new-found friends in London whom he constantly had in stitches.

With a little persuasion, Luca signed up for one of the toughest challenges any burgeoning stand-up comedian can make: the 'Beat The Gong' show at London's Comedy Store.

The premise is simple: would-be comedians attempt to complete a five-minute set in front of a ruthless crowd of comedy aficionados. If unimpressed, audience members boot acts offstage by holding up red cards to show their displeasure with an act.

It is a daunting prospect – especially so if you are performing in your second language.

Yet Cupani flourished, endearing himself to the audience immediately – and announcing his arrival in the world of stand-up comedy – with the simple words: “Before you gong me off: I'm single and HIV negative.”

Needless to say, he survived the full five minutes and his set – which talks about the experience of an Italian in London and sexual frustration – was voted best act on the night by the crowd. The Comedy Store have since invited him back to perform between other acts three times.

“I wasn't at all nervous doing it but it's crazy, I've never really been a success at anything first time around,” Luca reflected.

Ironically, the same lack of perfect English that stopped him from realizing his acting dream has helped him as a comic.

“Sure – sometimes it is more difficult, because you have to think a lot more – but in a way it's very helpful too,” Luca says. Certainly, his musical accent and slightly deviant syntax add something special to his already offbeat delivery.

Although it it is perhaps English culture more than simply 'being foreign' that has helped him most on his journey to becoming a comic.

“The UK is very different different to Italy. Here there is a great tradition of stand-up, and people go out with friends to comedy clubs. In Italy, people mostly go out to with friends to eat and drink. Italian comedy is good but tends to be based on characters and sketch shows.”

Luca says it would have been difficult or even impossible for him to crack the entertainment business in Italy due to the infamous levels of nepotism and corruption that blight the country.

“I definitely would have needed to know somebody in the business to have got anywhere. In the UK I just walked off the street into a comedy club without knowing anybody.”

In August last year Cupani won the “So You Think You're Funny?” comedy showcase at the Edinburgh Festival. To call the event a look at the future of British comedy would not be unfair: previous winners include comedy heavyweights Lee Mack, Peter Kay and Dylan Moran.

Since then, there have been more laughter-filled gigs and more opportunities. On January 31st, Cupani will be performing as part of the '2016 New Acts of The Year Comedy Showcase' in front of a packed crowd at London's Leicester Square Theatre.

He hopes to continue along the path to UK comedy stardom and has no plans to return to Italy in the foreseeable future.

“Sure – one day I'd maybe like to go back and do comedy in Italy, but there are still so many comedy clubs in the UK that I would love to play.

“This time next year I'd like to have played the Apollo Theatre (in London) – but maybe when I say that i'm being too optimistic… I'm still single so I'll be happy if I continue doing gigs and find a girlfriend,” he said with a laugh.