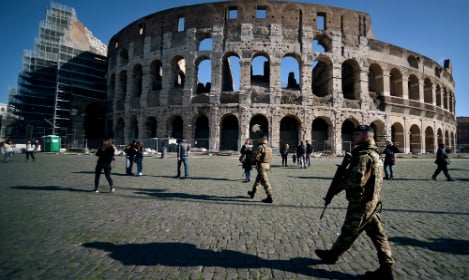 What is keeping tourists away from Rome? Photo: Filippo Monteforte/AFP

The number of tourists visiting Rome fell five percent in December compared to the same month in 2014, according to figures from the hotel association, Federalberghi, and January is also looking dismal.

In what the Italian media has dubbed the 'Bataclan effect', visitors are reportedly steering clear because of the perceived theat of a terrorist attack in major global cities following the November 13th attacks in Paris.

But is this a fair assessment?

Rome hotelier Ferdinando Orecchio said that bookings at his Hotel del Corso have been down since the start of the year, and agrees that a five percent drop in December “sounds about right”.

“About a year ago the government hiked the city tax each visitor has to pay, and as a result we have less bookings,” he told The Local.

“At the same time there have been more people letting rooms and apartments through things like Airbnb.”

Much to the chagrin of the staff at his hotel, the Holy Year, or Jubilee of Mercy, hasn't been as lucrative as expected since it kicked off in early December.

For now, predictions that the event would see an extra 25 million visitors come to the city seem wide of the mark.

“It's been a total flop – we were hoping for much more but we had a lot of empty rooms,” Orrechio's business partner, Christian Suppressa, said.

The dip comes after a record summer for tourism in 2015, with visitor numbers across Italy remaining bouyant until at least November amid a mild autumn.

France was even the world's most popular tourist destination, despite two major terrorist attacks in 2015.

Certainly, as people strolled past boutiques and chestnut vendors along Rome's main shopping thoroughfare, Via del Corso, the atmosphere seemed anything but tense.

“It's a load of nonsense, isn't it?” said Eddie, a British tourist, who was spending a few days in the city with his wife.

“You've got more chance of being hit by a bus than being killed by a terrorist.”

So if terrorism isn't keeping tourists away, then what is?

Perhaps it's bad publicity. Last summer, a string of articles in the international press slammed the levels of degradation in the capital.

Rome was rocked by persistent public transport problems and rubbish piled up in front of the city's most iconic monuments as the now ex-mayor, Ignazio Marino, attempted to wage an unsuccessful war against corrupt officials and striking public sector workers.

But has the Eternal City lost some of its appeal?

“Not at all,” Eddie's wife, Stephanie, said. “We were here in 1998 but we've come back for a second visit. Just look at this place – it's got everything.”

Rome has some 7,000 hotels and is one of the most hotel-rich cities on earth, according to figures from Booking.com. New York, by contrast, has just 720.

So in this respect, falling visitor numbers create havoc in a city where competition is so fierce.

Interestingly, Federalberghi reports that the drop in tourism is particularly stark across some nationalities.

The number of visitors from Japan fell a massive 70 percent in December from the same month in 2014, while there were 50 percent fewer Russians and a 30 percent drop among visitors from China. All three countries are grappling with economic problems, which has no doubt hit the pockets of travellers.

But not everybody is concerned about the more subdued tourism. A stone's throw from Piazza del Popolo at the popular Risati bar and restaurant, 48-year-old head waiter Orlindo explains that the makeup of Rome's tourists is always changing.

“We are lucky because we are right in the centre of Rome and manage to pull in a lot of visitors no matter what happens. But it has been a bit quieter, especially at the weekends. Normally there are lots of Russians here at this time of year, but I haven't seen many this year.”

Russians celebrate Christmas on January 7th and many choose to spend their holidays in Rome, between shopping in the sales and culture.

“But it changes every year… so far in 2016 there have been a lot of Greeks, so I'm not too worried about it.”