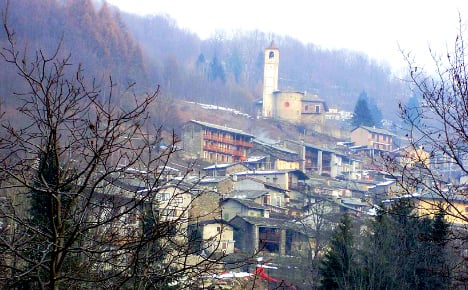 An Italian town is celebrating its first baby in 28 years. Photo: FrancoFranco56/Wikimedia

Just six days old, little Pablito became the youngest resident of Ostana when his father took him to the local registry office earlier this week: an event which caused the town's population to swell to 85 inhabitants – of which just 41 live there all year round.

“It's great to finally have someone born here and it shows that our efforts to reverse population decline are slowly working,” Ostana Mayor Giacomo Lombardo told The Local.

Lombardo explained that 100 years ago the town was a flourishing mountain community with over 1,000 inhabitants. The population fell to 700 in the post-war years before going into a rapid decline.

“The nadir was reached in the 1980s when the population hit an all-time low of just five permanent residents,” Lombardo said.

But since then the mayor has been working to improve the economy of the town to attract young people and reverse its slide towards becoming a ghost-town.

Today, the town has two restaurants, a shop and bar in addition to its mountain refuge.

In a newly built multi-purpose space, a cinema school runs each year, which manages to attract tens of young people from across Italy.

“The problem is that there is really an absence of politics to help small mountain communities – we are a long way from Rome,” Lombardo said.

“But we are hanging on in there and planning a party on Sunday to celebrate our latest arrival.”

But the new arrival was very nearly born thousands of kilometers away.

A few years ago the child's parents, Josè Berdugo Vallelago, a 36-year-old immigrant from Spain and Silvia Rovere, a 41-year-old from the nearby town of Verzuolo, were planning to go and live and work on the tropical French island of Reunion in the Indian Ocean.

The pair had even bought plane tickets, but changed their plans at the last minute, when Ostana's council offered them a job running the local mountain refuge.

Standing in the shadow of the 3800-meter giant Monviso, the picturesque town is a popular place with hikers – even if very few people still live there.