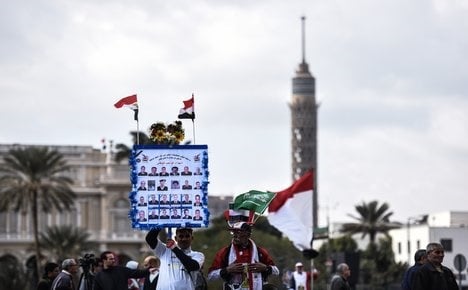 The Italian student disappeared on January 25th, the fifth anniversary of the Egyptian revolt, a day which was marked with marches in Cairo. Pro-government Egyptians are pictured here. Photo: Mohamed

The ministry is “following with the utmost attention and concern the affair of Giulio Regeni, a 28-year-old Italian student who mysteriously disappeared on the evening of January 25th in the centre of the capital,” it said.

Foreign Minister Paolo Gentiloni on Sunday called his Egyptian counterpart Sameh Shoukry to “determinedly ask for the greatest commitment to tracing the compatriot and providing every possibly information about his circumstance”.

Regeni hails from Fiumicello, near Udine in Italy's north-east, according to Italian media reports, which said he was in Egypt to study. His family flew out to Cairo on Wednesday.

The ministry said it was in direct contact with both the Egyptian authorities and Regeni's family, but did not provide any further details about what it believed might have happened to the young man.

January 25th was the fifth anniversary of protests that ended former Egyptian president Hosni Mubarak's 30-year rule and Italian media reports said there was a tough security crackdown in the run-up, amid fears among the authorities of fresh mass demonstrations.

Experts say discontent has been rising since President Abdel Fattah al-Sisi ousted the Muslim Brotherhood from power, largely due to the country's gloomy economic outlook.