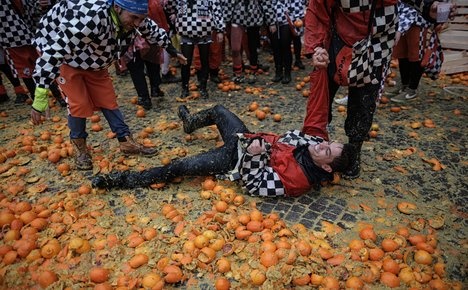 But 70 ended up injured after being struck a little too hard on the head by the citrus fruit, which are shipped up from Sicily especially for the ‘Battle of the Oranges’ each year.

Twenty-eight others also over-did it on the local mulled wine, including a 12-year-old boy who is in a coma after drinking too much alcohol, La Stampa reported.

All this high-drama came on the first day of the three-day orange battle, which marks the start of the carnival season and is a re-enactment of a centuries-old legend of the locals’ fight for freedom against suppression by an evil baron.

Some of the carnage was captured on this video:

The number of wounded orange fighters might seem high, but that’s less than half the number (142) of those hurt by the flying fruit last year.

Organizers said 7,000 tickets were sold, at €8 each, to those who wanted take part in the orange battle, as more than 16,000 spectators looked on.

The ‘battle’ is said to commemorate the overthrow of an evil baron who suppressed the citizens of the Alpine town in the 12th century.

Outraged by his demands, a young woman beheaded the baron and the townsfolk destroyed his castle, which was never rebuilt.

Initially, the citizens of Ivrea – who are known as Eporediesi – commemorated the event by throwing beans and confetti. But in the 19th century, the commemorations descended into a full-on orange war when young women started throwing oranges at coaches from their balconies to try to attract the attention of the town's eligible men.

Today, the battle is an intense three-day event involving nine teams hurling oranges at each other. Most participants fight on foot but some of them aim their citrus fruits from horse-drawn carts.

The event is such an integral part of the town that a young Italian has even turned it into a computer game.

Some 270,000 kilograms of oranges are brought in from sun-drenched Sicily as they do not grow in the Alpine town.

It's not the only crazy festival to still be taking place each year in Italy.

You can find out more by clicking here.