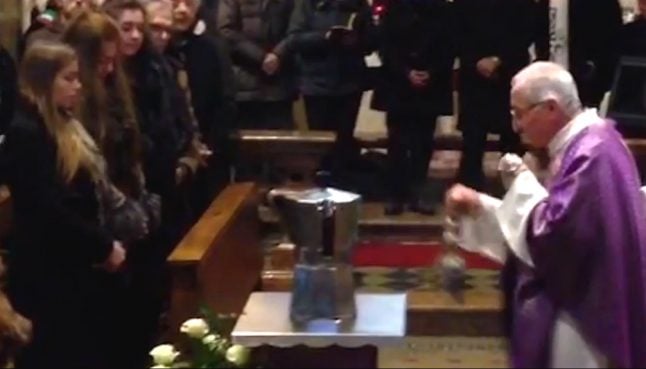 Coffee king Renato Bialetti was buried inside a coffeepot on Monday. Photo: Screengrab/LaStampa

The 93-year-old Bialetti passed away last Thursday and according to La Stampa it was his children, Alessandra, Antonello and Alfonso, who decided it would be fitting to put his ashes inside one of the pots that had made the family name famous.

On Monday, a stove-top espresso maker filled with the cremated remains was taken to a church in his hometown of Casale Corte Cerro, Piedmont, where it was blessed by a priest during a funeral service, as can be seen in the video below.

The pot was then taken to the family tomb in nearby Omegna, where it was placed next to his late wife Elia.

While using a coffee pot as a makeshift urn is an eye-catching choice, Renato Bialetti was a man who had dedicated his life to ensuring the Moka was a must-have item for coffee drinkers globally.

The patent for the pot was acquired by Renato's father, Alfonso, in 1933.

Alfonso recognized the potential of the gizmo – one of the first kitchen items to be made from aluminum – which promised to bring high-quality, espresso style coffee into homes for the first time.

But Alfonso struggled to market the aluminum pots on a large scale, only selling them at local markets around Piedmont.

But thanks to the younger Bialetti, the fortune of the Moka began to change.

He launched a huge marketing campaign, renting billboards in major Italian cities and became a mascot for the brand, printing a caricature of himself ordering a coffee on each pot. A caricature of Renato still adorns each pot. Photo: Wikimedia

The much loved mascot, known as L'omino con i baffi – the little man with the moustache, certainly had an effect – as of today some 330 million Moka pots have been sold worldwide.