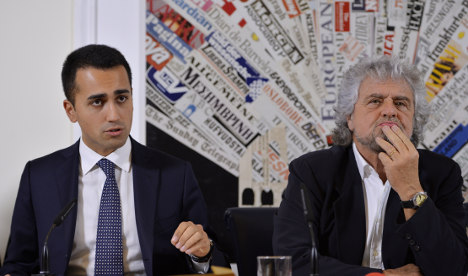 But in an unexpected about-turn, this week it refused to green-light a motion to speed up the draft law's adoption, opening the door to a series of wrecking amendments by opponents.

“The civil union bill was an unmissable moment to put Renzi in difficulty,” Franco Pavoncello, political science professor at John Cabot University in Rome, told AFP, though he warned the M5S could face “fallout” over the perceived betrayal.

Italy is the last major country in Western Europe not to offer gay civil unions. Close ties with the Vatican have sunk all previous attempts. This time the bill has met more fierce Catholic opposition over its allowing gay couples to adopt under certain circumstances.

M5S, founded in 2009 by Italy's famous acerbic comic Beppe Grillo, celebrated a shock success in the 2013 general election when it snapped up 25.5 percent of the vote, becoming the second biggest political force behind the PD.

Grillo, 67, announced last year that he was taking his bushy beard and trademark rants back to showbiz. His name has gone from the Five Star logo and he brought a new stand-up routine to Rome this week.

Gay rights groups were also furious, with protesters holding a sit-in outside Grillo's show in the Italian capital.

“It was a tactical move against the PD, but they (M5S) also want to arrive at the local elections without angering the right”, where votes are up for grabs, said Francesco Maesano, Five Star expert for La Stampa daily.

Political commentator Andrea Scanzi described the move as “cutting off your balls to spite your wife”.

“If they vote for the bill they clash with half of their electorate. If they don't vote for it they make the country miss a great chance to be less bigoted,” he said in Il Fatto Quotidiano.

Guido Moltedo, founder of online political magazine Ytali, told AFP the movement was “just like the scorpion in the fable” where he stings and kills the frog carrying him across a river because, despite his promises, he cannot help himself.

The party, born as a protest group, won votes from across the political spectrum with its platform against corruption and in favour of a euro-membership referendum – and refuses to make pacts with parties on the right or left.

The party's premise was that decisions should emerge from an egalitarian exchange of ideas by members on the Internet, but in fact the movement's “guru” Gianroberto Casaleggio dictates the party line, experts say.

The movement has expelled anyone who would broker deals, hampering its own attempts to secure significant policy results in parliament.

“How long can they remain without choosing sides on key issues? I don't think very long. What they are doing (over civil unions) is very dangerous and they risk losing swathes of voters,” Moltedo said.

Piergiorgio Corbetta, research director at Bologna's Cattaneo Institute and author of a book on M5S, said Grillo's dream of “direct democracy” had “proved an unattainable utopia”, and the party would struggle without him.

“The Five Star movement is a child of Grillo, his personality and communication skills. It's likely to slip into a rapid decline. We've seen it here, it's listing,” he said.

A poll by the Euromedia Institute this week showed the movement still has 24.5 percent of voter intentions but is slowly losing ground to Renzi's PD, which currently stands at 32 percent.

Its strength will be tested this year at local elections in Rome, though many have warned winning the mayorship could be a poisoned chalice, given scandal-hit Rome's problems.

“I hope for their sake they don't win, or they'll find themselves with an unmanageable hot potato,” Corbetta said.