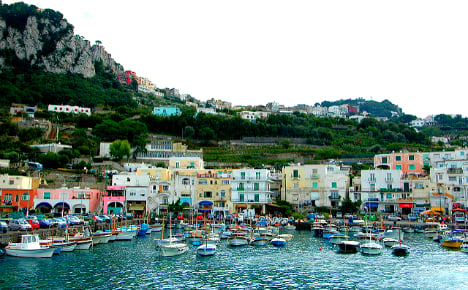 “I saw it was a growing phenomenon in the town and I didn't like it,” Mayor Francesco Cerotta told The Local.

“So we held a referendum last May, asking citizens if they would be okay with banning machines within 150 meters of 'sensitive' and 'inappropriate' areas, things like cash machines, schools, churches, tourist beaches and so on.”

The result of the referendum was stark. Nine out of ten citizens voted in favour of the ban – which given the size of Anacapri – meant no area of town could legitimately operate a slot machine.

On January 1st, they were all unplugged.

At first some shopkeepers complained – as slot machines represent a very easy way for them to make money. But an administrative court in Campania upheld the council's landmark decision, which is unprecedented in Italy.

Already, this year the cities of Bologna and Bolzano have both lost similar appeals at local administrative courts over legislation that would have banned the machines within 300 meters of similar, 'sensitive' areas.

Slot machines are quite the money spinner for the Italian state, which has been reluctant to take concrete action to curb their spread.

It's not difficult to see why: through taxes and licences, the government raked in over €8 billion from slot machines in 2015.

Critics say it has contributed to the country's growing gambling problem which, due to the ubiquity of slot machines across the country, is spiraling out of control.

In L'Aquila, a city still struggling to recover from a devastating earthquake in 2008, there is currently one slot machine for every 83 of the city's 70,000 inhabitants.

“Italy is one of the nations that gambles the most and especially on slot machines, ” Fabio, a middle-aged former addict now working with Gamblers Anonymous in Italy, told The Local.

An investigation by La Stampa on Monday reported some €87.8 billion was gambled in Italy last year – €50 billion of which was spent on machines.

“Gambling addiction is a serious problem that doesn't have a clear cause. It destroys families and creates parallel problems such as depression, theft and substance abuse. In short: it ruins lives and often leads to suicide.” “Anacapri has made a good start but compulsive gamblers will continue to find a way and can continue to buy scratchcards, bet online and place bets on sport,” Fabio added.

“However, it will help prevent people getting hooked and will hopefully stop children getting involved.”

A  2014 study by market research group SWG revealed that 80 percent of Italian adolescents surveyed gambled at least once a month, with 60 percent of children gambling on a weekly basis.

Mayor Cerotta hopes Anacapri's example can convince other towns to ban machines too.

“We hope we can convince other councils to follow suit. If we can get our neighbouring town of Capri to pass the same legislation perhaps we can even become Italy's first slot-free island.”