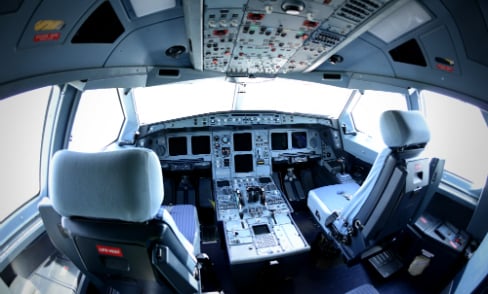 The pilot was stopped at Rome's Fiumicino airport after threatening to down the jet. Photo: Gabriel Buoys/AFP

The pilot, from Padua, was fortunately stopped by police as he boarded the Tokyo-bound jet from Rome's Fiumicino in January last year, although the incident has only just been leaked to the Italian press.

He sent the text message to his wife after rowing with her before boarding the plane, Il Fatto Quotidiano reported.

“If you leave me, I'll crash the plane,” he wrote.

His wife, who had reportedly been trying to leave him for some time due to his alleged stalking tendencies, immediately alerted police, who sent the message to Enac, Italy's national aviation authority, in a desperate bid to stop the pilot from entering the cockpit.

The man, who reportedly worked for a foreign airline, was immediately suspended from his job and sent on a psychotherapy course.

The information was leaked to the press ahead of the one-year anniversary of the GermanWings crash in the French Alps, killing all 150 people on board.

On March 24th 2015 – just two months after the Italian pilot was stopped – the flight from Barcelona to  Düsseldorf was deliberately downed by its clinically depressed pilot, Andreas Lubitz.