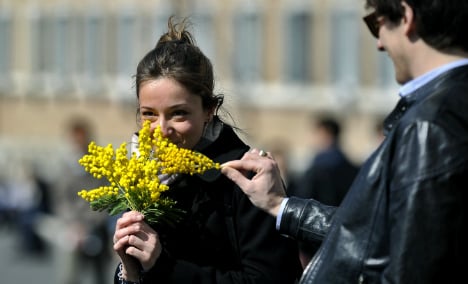 But when you consider the high rate of violence against women in Italy, the move is not so strange: 152 women were murdered in 2014, with a man being the main person responsible in almost 94 percent of the cases, according to figures released in November.

In the same year, 27 percent of Italian women reported physical or sexual abuse by their current or previous partner, according to figures from an EU rights agency report.

The pepper spray initiative being undertaken in Fontevivo, near Parma in northeast Italy's Emilia-Romagna, is set to cost some €600.

“It's a simple and concrete measure to help women defend themselves from people with malicious intentions,” he wrote in a note to the town's women inside the pepper spray gift bag.

“We obviously hope that you never have to use it, but in case of an emergency it might prove useful.”

In Italy, it is traditional for men to present women with a bunch of mimosa, a yellow flower that has become the national symbol of International Women's Day celebrations.

But Fiazza said he felt pepper spray was a more useful gift.

“Obviously, flowers are beautiful but far too many women are downtrodden, attacked and sexually assaulted. We want to help them defend themselves,” he told Il Fatto Quotidiano.

Despite the prevalence of violence against women in Italy not everybody was pleased with the mayor's decision.

“Is a town in our province really giving out pepper spray as an 'initiative' for Women's Day?”, wrote Democratic Party (PD) politician Patrizia Maestri in a post on Facebook.

“A fantastic cultural activity, I'm sure! What an embarrassment.”

But Fiazza defended the move, saying the town has reportedly been inundated with requests from women asking how they can claim their gift.

“The PD can say what it likes.  It's an innovative initiative and the women of the town have thanked me for it. Not one single citizen has complained.”

Beyond Fontevivio, International Women's Day will be marked by more traditional initiatives. Culture Minister Dario Franceschini announced on Twitter that entrance into state museums would be free for all women.


New laws to protect women against domestic violence were introduced by Enrico Letta’s government in 2013 following a UN report a year earlier which described domestic abuse in Italy as the “most pervasive form of violence in the country”.

The laws stipulated harsher penalties for men who attack pregnant women or harass their current or ex-partners, and also enabled police to remove an abuser from the family home.