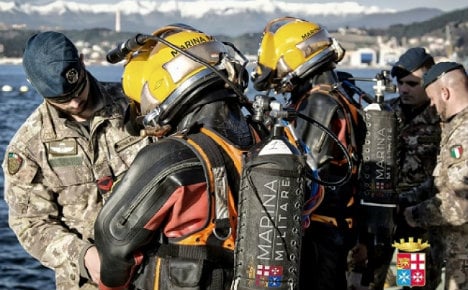 The Italian Navy will begin removing tonnes of explosives from beneath a busy Ligurian port. Photo: Marina Militare

The torpedoes and shells on the boats had since spilled out onto the seabed, 45 meters below a busy mooring site near the port of Vado Ligure, Il Secolo XIX reported.


The wreck of one of the ships. Photo: Screengrab/Il SecoloXIX

The explosives are estimated to have power equivalent to 50 kilogrammes of TNT.

Following the discovery, the area within a 500 meter radius was closed off to all maritime traffic as one heavy anchor thrown on top of an explosive risked setting off a powerful underwater blast – creating a shockwave powerful enough to destroy any ship above.

On Monday, the Italian Navy began raising the explosives from the sea floor.

The devices will be raised in batches and  placed on a small barge, before being taken three kilometers from the coast where they will be detonated via controlled explosion.

The operation could last up to two weeks depending on weather conditions.

“The prow and stern of the ships were both badly damaged and we found no indications as to their provenance,” Bada told the Ligurian newspaper, Il Seccolo XIX.  “However, we suspect they were Italian-armed motorboats.”