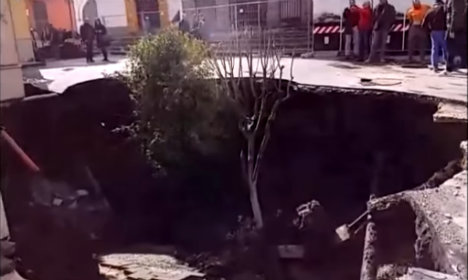 A sinkhole swallowed cars and trees in the Italian town of Afragola. Photo: Screengrab/IlMattino

Nobody was hurt in the incident, which happened in the early hours of Monday morning.

The opening of the chasm, which was seven metres long, seven metres wide and seven metres deep, damaged underground pipes and cut off the water supply to some local residents.

A video of the sinkhole and its contents can be seen below.

The gigantic hole is thought to have been caused by either an underground drain or tunnel caving in.

Several tunnels are known to run under the square and once connected the crypt of the nearby church of San Giorgio to the town's castle.

In February last year, a sinkhole caused by a burst water pipe saw 300 people evacuated from their homes in Naples, while in October a female driver watched her car disappear into a sinkhole in Catania.