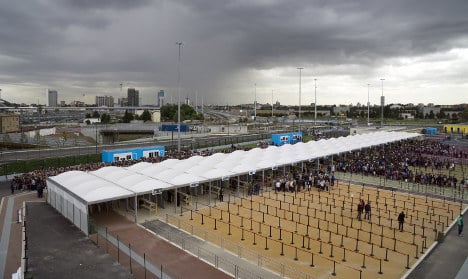 Ninety refugees arrived at the Rho-Pero site, which is capable of accommodating up to 500 people, on Monday afternoon.

More are expected to arrive from the Sicilian island of Lampedusa, where they landed over recent weeks, on Tuesday, Corriere reported.

The site, which also has a canteen, is made up of prefabricated buildings outside the main exhibition centre.

Faced with the challenge of housing refugees, Milan’s prefect, Alessandro Marangoni, and the Red Cross, which will manage the site, decided to separate the migrants from sub-Saharan Africa from Syrians staying at a refugee centre in Bresso, which already hosts 300 people. Other centres in Lombardy are full.

They said the move was a “temporary” solution while in a situation of “emergency”.

But Lombardy president Roberto Maroni, of the right-wing Northern League, said using the site for refugees was “unacceptable”, while Riccardo De Corato, from Fratelli d’Italia (Brothers of Italy), said alarm bells were sounded in November, just weeks after grand plans for a scientific research centre at the site were unveiled.

“Nothing is more definitive than ‘temporary’. We are saying that the immigrants will stay at the Expo site for a short time, but we know how it will end,” De Corato said.

But the condemnation didn’t just come from the usual suspects within Italy’s right-wing parties.

Stefano Parisi, the Milan mayoral candidate for Silvio Berlusconi’s centre-right Forza Italia, said that “Lombardy has already done more than any other region” when it comes to housing refugees.

“The problem is not about welcoming refugees or not, it’s the location choice that gives us cause for concern.”

Some 20 million people visited Milan Expo, with a jubilant Matteo Renzi saying as the six-month exhibition wrapped up in October that the government was ready to invest some €150 million a year over the next decade to create a “world class” scientific research centre.

Parisi argued that the refugee centre could dampen those ambitions.

“Milan wants innovation, a high quality of life and services, research, jobs. Choosing to put a refugee camp at the site, which will remain there for who knows how long, will depress the entire project,” he said.

“Marangoni must obviously manage the emergency and follow the government’s orders. But it’s a mistake for Milan. We have invested in an area with the idea that it will become a centre of excellence and a great development project for Milan. Now, we’re going in the opposite direction.”

The decision to house refugees at the site, which Italy spent some €13 billion developing, follows in the footsteps of Athens, where hundreds of refugees are sleeping in venues that hosted the 2004 Olympics.

Both Italy and Greece are struggling under the weight of persistent migrant arrivals.

Prior to those rescues the UN refugee agency (UNHCR) had reported 9,500 people landing at Italian ports since the start of the year.