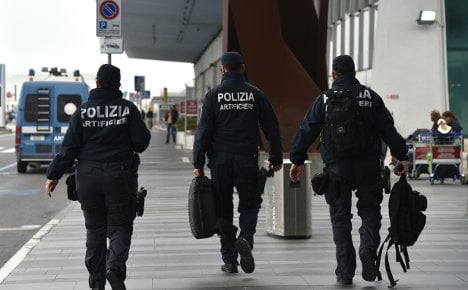 Police patrol at Rome's Fiumicino aiport on Tuesday as security measures were reinforced in the wake of attacks in Brussels. Photo: Tiziana Fabi/AFP

The 46-year-old was arrested on a European warrant, Interior Minister Angelino Alfano told reporters after a meeting of security officials.

Alfano did not say whether he was connected to the Brussels attacks, which left 31 people dead and over 200 injured.

Alfano added that he would be signing additional deportation documents for foreigners who “demonstrated that they do not respect the country’s rules”.

The man was arrested while sleeping in his car parked on a street near Naples, La Repubblica reported. He reportedly told police that he was a property agent who found luxury properties in the area for wealthy Arabs. When asked where he lived, he claimed “in my car”.

The Iraqi is also wanted by Switzerland on suspicion of attempted rape.

Italy deported 75 people, including five imams, last year, while 396 people were arrested as part of an anti-terrorism sweep.

Italy raised its security level to 2, the highest possible in the absence of a direct attack, in the wake of the Brussels attacks.

Intelligence sources told Ansa that while there is no indication of an imminent terrorist attack against Italy, the threat remains high.