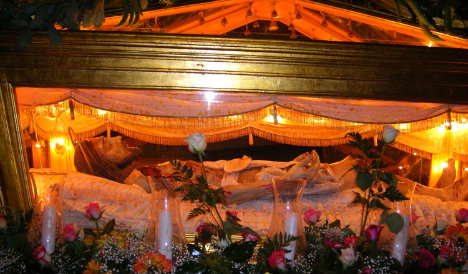 An Easter parade of the Jesus statue shown above was redirected to pay tribute to a mafia boss. Photo: Wikimedia

The annual Good Friday procession in San Michele di Ganzaria, Catania, sees a large statue of Jesus' body carried through the town. But this year as local citizens and clergy members followed the procession, the statue suddenly took a different route, Ansa reported.

This is by no means the first time a religious procession in a small Italian town has stopped outside the home of a mafia figure to pay tribute.

In June 2014, the Calabrian town of Oppido Mamertina made headlines after a statue of the Madonna was stopped outside the house of a local mobster famous for feeding his victims to pigs.

It was not an isolated incident. The practice is reportedly commonplace in the Calabrian towns of Scido and San Procopio, and this year it was recorded in Sicily.

The statue bearers deviated from the agreed itinerary and instead marched the statue to Monte Carmelo square, where the family of jailed mobster Francesco La Rocca resides.

The procession stopped under La Rocca's family home, as relatives came on to the balcony to applaud.

The homage was highly embarrassing for the town's mayor, Gianluca Petta, who stopped following the procession and took off his sash as soon as he realized what was happening.

Several residents also abandoned the cortege once they realized why the statue had changed its course.

Anti-mafia investigators are now looking into how and why the procession changed course and have promised to charge the culprits with disturbing public order.

“It's ridiculous,” prosecutor Giuseppe Verzera told Ansa. “We need to understand what happened and find out if somebody is responsible. The police are handling the investigation and I will have a report in the next few days.”

La Rocca is currently serving a life sentence after being arrested in 2005. He was an influential mobster, with links to Cosa Nostra's powerful Corleone and Provenzano families.

According to ex-mafioso turned informer, Antonio Calderone, La Rocca “became a beast when he killed,” and preferred to silently strangle his victims.

“If the police investigations reveal who's behind this, then they deserve to pay,” Petta told Ansa.

“The great majority of our law abiding citizens abandoned the procession, but it's very disappointing that a display of faith has been marred by these events.”