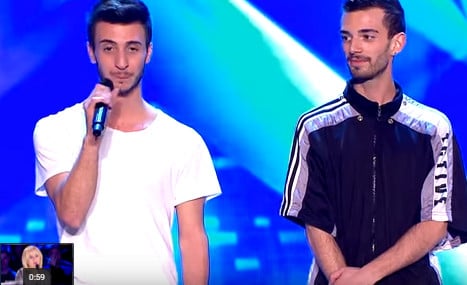 The two dancers’ brave ‘coming out’ managed to win over the four judges of the popular show, which is screened to millions of viewers each week on TV8.

“What we’d love to do tonight is show who we are; our everyday lives, our story,” the couple, who go by the stage name ‘You and Me’, said before they began their dance, which they had just 100 seconds to perform.

Afterwards, one of the judges, Luciana Littizzetto, asked: “Do you want to tell us something about your performance? Maybe we got it anyway…”

“We wanted to show the love we’ve been sharing every day for the past two years,” they replied. “Our mothers were the only ones to know about it, now everyone does!”

“Your fathers didn’t even know?” asked another judge.

“Beautiful,” said Littizzetto, while another judge said: “As soon as I saw you I could tell there was a lot of love between you.”

The couple were swifty voted on to the next stage in the competition.

It’s not the first time Italia’s Got Talent has been used as a platform for gay couples to declare their love. In 2015, a gay dancer proposed to his partner live on air.