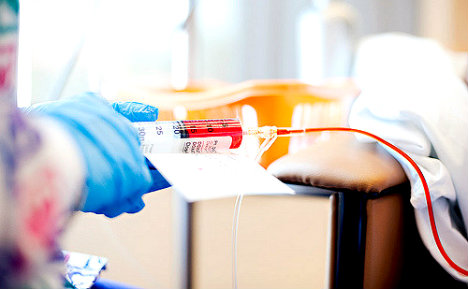 Six medics have been jailed after a woman was goven a fatal overdose of the chemotherapy drug vinblastine. Photo: Stephen Dickter

The case dates back to December 2011, when 33-year-old Valeria Lembo was undergoing her final chemotherapy session for Hodgkin's Lymphoma – a type of cancer curable in 85 percent of cases – at Palermo's Paolo Giaccone Policlinico hospital, Il Fatto Quotidiano reported.

Instead of being issued with nine milligrams of vinblastine as usual, she was issued with 90 milligrams, an amount 10 times than higher than she should have been administered.

In her ruling on Tuesday, judge Claudia Rosini wrote that the huge dosage would have been “suitable for a 600 kilogram mammoth”.

The overdose destroyed Lembo's immune system and she died 22 days later, leaving behind a husband and young child.

Lembo even pointed out the error to nurses during her final treatment, asking why she was being given a full drip of the drug and not an injection as she had previously received, but nurses told her not to worry.

During the final session, she also complained that the massive dose was burning her arm, but medical staff failed to spot the error and responded by lowering the drip rate.

Before she died, she told her aunt she was convinced the hospital had made an error during her final treatment.

Rosini said that the error amounted to “a murder” and that it had been “the greatest piece of medical negligence ever committed.”

Postgraduate medical student Alberto Bongiovanni, who completed the form ordering the administration of 90 milligrams of vinblastine, was sentenced to six and a half years in jail. His mentor, oncologist Laura Di Noto, was sentenced to seven years and struck off from the medical profession.

Both were charged with culpable homicide and forgery, as they went back and modified the initial form after they realized their mistake in a bid to cover their tracks.

The hospital's head physician, Sergio Palmeri, was also sentenced to four and a half years for culpable homicide, while two nurses, Clotilde Guarnaccia and Elena D'Emma, also received six month sentences for the same charge.

During the trial, Guarnaccia said she had been encouraged to lie to Lembo's family over the treatment, telling them that her deterioration in the days that followed was brought on gastroenteritis and was merely a common side effect of the drug.