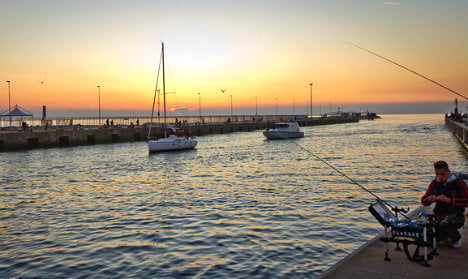 A shark was seen swimming up the mouth of Rome's Tiber river on Tuesday. Photo: Nicola/Flickr

The shark, whose genus is currently unknown, was spotted by boating enthusiasts around 500 metres from the river's mouth, near the port of Ostia, Rome daily Il Messaggero reported.

The hobbyists photographed the shark circling in the water and immediately notified the port authorities of its presence.

A team was then dispatched upriver to look for the shark.

Port authorities briefly caught sight of the animal swimming around in the brackish waters at the mouth of the river, where the murky waters are some seven metres deep.

Following the sighting, a shark warning was given to bathers – even though the beaches of Ostia are yet to swell with visitors.

Boat owners have also been told to avoid carrying out manoeuvres which bring their body parts close to the surface of the river.

Most shark species are not known to swim up rivers, but the creatures are known to come in shore in search of food.

The last time sharks were seen at Rome's lido was in August 2014, when a large blue shark was spotted in the shallow waters off the popular beaches by numerous bathers.

As news of the shark circulated, panic set in among visitors to the Roman coast, causing a huge surge in the number of reported shark sightings.