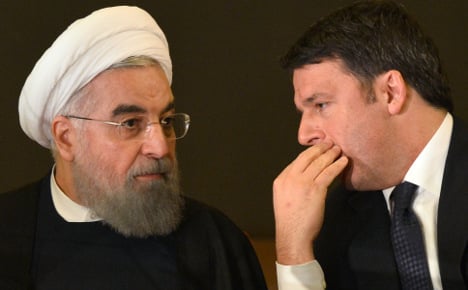 For Pietro Piccinetti, an Italian businessman who was among Renzi’s 250-strong delegation, there is only one way to tackle Iran’s appalling human rights record.

“It’s not through sanctions,” he told The Local.

“The best way to improve is by opening up, communicating and developing business relationships that help to overcome archaic situations.”

Piccinetti, the CEO of Fiera di Roma, an events management company, brushed aside concerns about Italy cosying up to Iran – where 977 people were put to death last year, according to figures from Amnesty International, saying that the image of the country is often misunderstood.

“The criticisms are easy to make,” Piccinetti, who has visited Iran several times since sanctions were lifted, added.

“Obviously, it’s an Islamic republic; but there is freedom of worship [there are churches and synagogues] and the way of life is Western.”

Renzi’s visit was aimed at restoring ties that before the sanctions had seen Italy positioned as Iran’s top European trading partner.

Trade between the two peaked at about €7 billion a year, but a decade of penalties saw that plummet to €1.59 billion.

Both Renzi and Iran President Hassan Rouhani, who visited Rome in January, are now keen to revive the golden-era.

“Italy has a special place among Iranians,” Rouhani said during a press conference on Tuesday. “Its companies and its industry are appreciated here.”

Indeed, Piccinetti, who is also the president of AEFI, the Italian exhibition and events association, doesn’t dispute this.

Even during heightened tensions between the EU and Iran, Italy maintained cordial diplomatic relations.

This is one of the reasons why Rouhani picked Italy as his first stop in his endeavour to nudge closer to Europe and to attract European firms to help modernize sectors that were damaged by the sanctions.

When he visited Rome, he spoke about rebuilding a relationship between “two superpowers of beauty and culture” that dates back to the days of the ancient and Roman Persian empires.

At the time, the two countries agreed the initial terms on deals valued at as much as €17.1 billion, mostly targetting the oil, transport and shipping sectors.

But as the two leaders met again on Tuesday, a host of Italian dignitaries, including former foreign minister Giulio Terzi, came together to warn Italy about doing business with the Iranian regime.

In particular, they warned big companies such as Eni, Fiat and Finmeccanica, that the lucrative trade deals risked damaging their reputation.

“An environment of risk and uncertainty looms large for the shareholders and executives of Italian companies considering doing business in Iran,” they said in a joint statement issued by United Against Nuclear Iran (UANI), an organizing aimed at preventing Iran from having nuclear weapons.

“Their big bet could turn into a disastrous gamble given the enormous financial, legal, and reputational risks they would face in re-entering the Iranian market.”

They also said Renzi must “appreciate that both the American and Italian people share a deep suspicion of the Iranian regime, particularly given the heightened intensity of its threatening conduct”, and that the Italian leader should instead focus his efforts on “pressuring Tehran to halt its destabilizing and provocative activities, rather than prematurely rewarding the regime with lucrative business opportunities”.

Meanwhile, visits by European officials and the money earned by Iran through associated trade deals only serve to embolden the regime to suppress dissent at home, argued Shahin Gobadi, from the foreign affairs committee of the National Council of Resistance of Iran (NCRI), which had urged Renzi to cancel his trip.

In its ‘Death Penalty 2015’ report, published on April 6th, Amnesty International said that last year “Iran alone accounted for 82 percent of all executions in the Middle East and North Africa”.

“Rouhani has explicitly endorsed the executions as examples of ‘God’s commandments’ and ‘laws of the parliament that belong to the people’,” Gobadi told The Local.

Gobadi also pointed to Iran being a close ally of Syria’s Bashar Assad as well as the recent testing of long-range ballistic missiles, capable of carrying nuclear warheads, that were inscribed in Hebrew with the regime’s axiom, ‘Israel must be wiped out’.

“All of this begs the question that so far as it concerns the Iranian people, and the international community, what is to be gained from such visits? What will be their impact, other than to suppress descent and give propaganda fodder to the regime for internal consumption?”

But as Iran tries to go from being a pariah state to a major player on the world stage, isolating the country could backfire, Cinzia Bianco, an analyst and researcher for the Middle East and Mediterranean region, said.

“Of course, one would expect such arguments with a country like Iran, with its appalling standard of human rights,” she told The Local.

“At the same time, isolating a country, even one with such a bad record, will not work.

“Instead, Italy, and a number of other EU countries, are trying to include the topic in their discussions, in a way that doesn’t offend but which still pressurises Iran to improve.”

The EU on Monday extended sanctions against 82 Iranian officials until 2017 over “serious human rights violations” in the country.

Apart from helping Iran to advance, and hopefully improve its track record, the closer relations will benefit Italy, Bianco added.

“The obvious benefit is economic – relations between Italy and Egypt have recently turned sour. A lot of Italian firms are already wary about doing business there, and so Iran is taking its place,” she said.

“Iran needs investment and Italy is already present and has the strength to provide it, across all sectors. With regards to exports, there is also demand for ‘made in Italy’ products among Iran’s middle and high-class.”