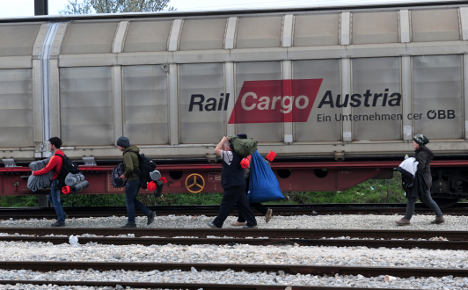 Austria said it would tighting controls at all of its borders from June 1st. Photo: Sakis Mitrolidis/AFP

The country’s Defense Minister Hans Peter Doskozil said the “extreme” measure would be implemented if Italy fails to stop refugees crossing the border or doesn’t accept those who are sent back.

Speaking at a meeting of his SPÖ party in Innsbruck on Wednesday night, Doskozil said the Tyrol area of Austria has become a “refugee waiting room”.

Austria is adopting an increasingly hardline approach to the refugee crisis, deporting 2,800 failed asylum seekers since the start of the year.

Austrian police said construction work began on Tuesday on concrete foundations for a planned control area off the northbound motorway at the Brenner pass, which was an active transit point last summer for migrants making their way up from southern Italy.

Meanwhile, Austrian Interior Minister Johanna Mikl-Leitner said that while her government will do everything possible to avoid drastic solutions, “Italy must do more to process migrants”.

Austria, which received 90,000 asylum claims last year, has already stepped up controls along its borders with Slovenia and Hungary.

The planned fence at the Italian border came under attack by the EU after Italy's Foreign Minister Paolo Gentiloni and Interior Minister Angelino Alfano wrote a joint letter to EU Migration Commissioner Dimitris Avramopoulos demanding that he urgently raise the issue with Vienna.

“If these plans should materialize then we will have to look at them very seriously. The Brenner pass is essential for freedom of movement within the European Union,” she told a press conference. “The Commission is very concerned.”

The Italian ministers said the Austrian actions “did not appear to be based on the facts”, adding that Mikl-Leitner had “presented no data showing an alleged increase in the migrant flow from Italy”.

Austria, which has said it will implement additional control measures at its borders from June 1st, is also concerned that following the closure earlier this year of the Balkan trail from Greece towards Austria, a new route across the sea from Libya to Italy and then northwards will open up.