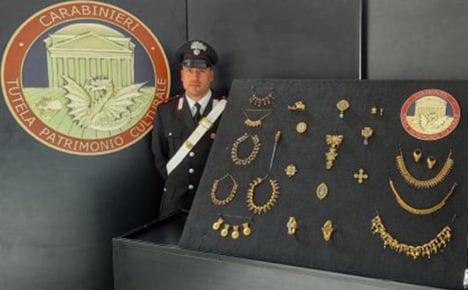 The €3 million heist was arranged by a wealthy Russian woman with a penchant for gold. Photo: Italian police

The jewel-encrusted gold pieces, made by Italy's Castellani – which rose to fame in the 19th century for recreating jewellery found in archaeological digs and embellishing them with gems or mosaics – were snatched from Rome's Villa Giulia museum.

“It's a great day, now the gold returns to the museum,” Culture Minister Dario Franceschini said, as detectives explained how they had recovered 23 of the 27 pieces stolen.

Marked with the Castellani trademark, the pieces were hailed as priceless examples of founder Fortunato Pio Castellani's filigree and gold-speckling techniques used in antique jewellery.

They had been on display in the Villa Giulia museum.

Castellani's talent was such that museums from the Louvre in Paris to the V&A in London snapped up items up for their collections – but the Villa Giulia trove was the most admired.

Most of the haul, worth some €3 million ($3.38 million), was recovered after a tail was put on two suspects who were believed to be trying to hawk them to Italian buyers, police told reporters.

The Russian woman who organized the heist, who was not named, had been planning to smuggle the stolen earrings, bracelets and necklaces to Saint Petersburg, police said, but was spooked by the publicity surrounding the robbery.

Detectives were alerted to her possible involvement after it emerged she had contacted a series of Italian antique dealers in a failed bid to get her hands on Castellani items.

She was stopped with a Castellani catalogue in her bag and photographs of the display cases in the museum on her mobile phone, police said.

Two suspects were caught in 2013 trying to sell seven of the jewels.

Most of the other pieces were recovered last year, police said.