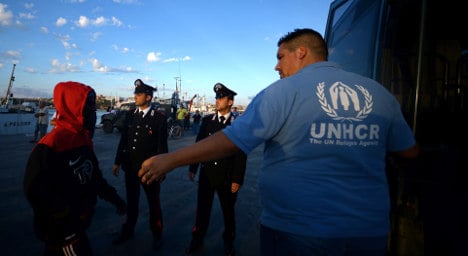 The UN fears up to 500 people have died during a boat disaster in the Mediterranean. Photo: Filippo Monteforte/AFP

Survivors who were spotted drifting at sea before being picked up by a passing merchant ship on April 16th told the UNHCR many migrants drowned when human traffickers tried to transfer people to an already overcrowded vessel somewhere between Libya and Italy.

The latest reported deaths come as Europe struggles to find a way of stemming the flow of people fleeing war, poverty and persecution in what has become Europe's worst migrant crisis since the Second World War.

“The survivors told us that they had been part of a group of between 100 and 200 people who departed last week from a locality near Tobruk in Libya on a 30-metre (100-foot) boat,” the UNHCR said in a statement.

“After sailing for several hours, the smugglers in charge of the boat attempted to transfer the passengers to a larger ship carrying hundreds of people in terribly overcrowded conditions,” it said, adding that the larger boat then capsized and sank.

The 41 survivors – 37 men, three women and a three-year-old child – are believed to have drifted at sea for up to three days before being rescued and taken to Kalamata on the Peloponnese peninsula in southern Greece.

Of those rescued, 23 were Somali, 11 Ethiopian, six Egyptian and one from Sudan, the statement said, adding that they were being temporarily housed in a stadium in Kalamata.

In what is believed to be the deadliest incident involving migrants and refugees trying to reach Europe, at least 740 people were feared to have perished in April 2015 after a crammed fishing boat capsized in Libyan waters.

In another incident in September 2014, up to 500 migrants drowned off Malta after people smugglers rammed their boat in an attempt to force them onto a smaller vessel.

The huge refugee influx arriving on European Union shores has sparked fierce disagreements among the bloc's 28 members and brought its system of open borders to the brink of collapse.

Under a deal with Ankara to try to ease the burden, migrants who travel to the Greek islands are being returned to Turkey in return for billions in EU cash.

The EU also promised to resettle one Syrian refugee for every Syrian taken back by Turkey, to grant visa-free travel to Turks within the border-free Schengen Zone and to reassess Turkey's stalled EU membership bid.

Migrant arrivals in Greece have fallen sharply since the agreement took effect on March 20th.

The number landing on the Greek islands has now stabilised at around 100 people a day – around a tenth of the arrivals last summer.

But about 50,000 people remain stranded in Greece since the closure of the migrant route through the Balkans in February.

More than 10,000 of them are stuck in a slum-like camp at Idomeni on the border with Macedonia, which has seen a growing number of violent incidents sparked by desperate attempts to break through the frontier.

More than one million people crossed clandestinely to Europe in 2015 while some 179,000 have made the trip since the start of this year, according to UNHCR figures.

More than 3,700 people died in 2015 trying the make the perilous crossing over the Mediterranean, with 761 recorded as dead or missing in 2016.

On Saturday, Pope Francis again highlighted the humanitarian crisis by visiting the Greek island of Lesbos and returning to Rome with three refugee families who fled the conflict in Syria.

The pope told reporters that his gesture was “a drop in the ocean” but hoped that afterwards, “the ocean will never be the same again”.