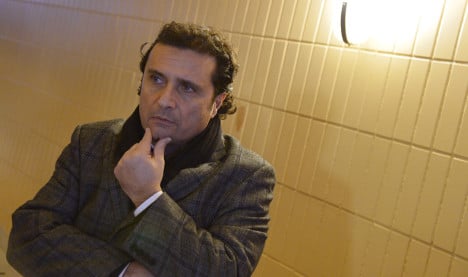 Schettino was sentenced in February 2015 to 16 years and one month in jail after a judge ruled his recklessness caused the accident that ensued after the giant pleasure boat struck underwater rocks off the Tuscan island of Giglio.

The 55-year-old career seaman, who has not yet begun his sentence, says he has been made the solitary scapegoat for the disaster and will seek to overturn his manslaughter conviction in an appeal which opens at 7.30am GMT on Thursday and will run through May at least.

The prosecution is simultaneously appealing last year's sentence, maintaining that Schettino should have been given 26 years.

During his first, 19-month, trial, Schettino was accused of showing off when he steered the ship too close to the island and of being distracted because he was entertaining a nightclub dancer.

He was convicted of multiple manslaughter, causing a maritime accident and of leaving his boat before all passengers and crew had been evacuated, in breach of centuries-old sailors' code.

The latter detail resulted in him being dubbed “Captain Coward' by the international media while prosecutors branded him “an idiot”.

Under Italy's long-winded legal system, Schettino was automatically granted an appeal and if it does not go his way he can try again at the Court of Cassation, the country's highest court.

“I will fight for ever to prove that I did not abandon the Costa Concordia,” he vowed after his conviction.

The failure to be the last man off the boat only accounted for one year of the sentence handed down in Grosseto, Tuscany last year.

But it was the accusation of cowardice and unprofessionalism that seemed to hit the Naples-born sailor the hardest.

His defence that he had “fallen” into a lifeboat was widely ridiculed and he broke down in tears during his final plea to be acquitted.

'Blame should be shared'

Schettino was given 10 years for manslaughter and five for causing a disaster that led to the biggest salvage operation in maritime history.

His lawyers said they will argue that blame for the accident should not fall exclusively on Schettino.

“We will ask that the responsibility of all the protagonists in this affair be redefined, not just that of our client,” Donato Laino, one of Schettino's advocates, told AFP.

Laino said the accident and its deadly impact had been primarily due to a failure of organisation for which the ship's owner, Costa Crociere, its Indonesian helmsman and the Italian coastguard should share the blame.

Many see Costa as having escaped lightly to date. The judges in Schettino's first trial ruled that the company must share civil responsibility for the disaster with the disgraced skipper.

But their compensation awards, totalling just over €7 million ($8 million), were limited.

The company sidestepped potential criminal charges in 2013 by accepting partial responsibility and agreeing to pay a €1 million ($1.10 million) fine.

Awards of €300,000 each for the region of Tuscany and the island of Giglio were a tiny fraction of what they were seeking for damage done to the sea bed and tourism.

Survivors of the disaster who had rejected Costa's initial compensation offer and become civil parties in the Schettino case were awarded an average of €30,000.

Among those awarded a payout were Domnica Cemortan, the blonde Moldovan dancer with whom Schettino had dinner just before the ship hit the rocks.

On top of the prison term, Schettino was banned from public office from life and from working as a ship captain for five years.