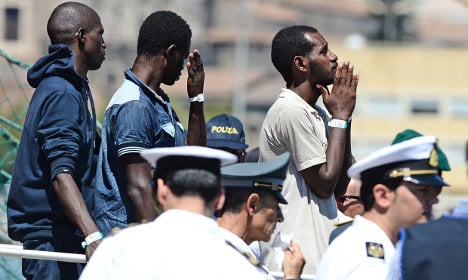 More than 350,000 people fleeing conflict and poverty have reached Italy on boats from Libya since the start of 2014. Photo: Giovanni Isolino/AFP

Among the missing were four Nigerians, two people from the Ivory Coast, three from Guinea, two from Sudan and one from Mali, she said.

Survivors were being disembarked in Pozzallo, Sicily, she said, adding that eight people had been taken straight to hospital “due to their serious health conditions,” and that two bodies had also been disembarked.

The news came a day after the International Organization for Migration said that only 26 people were rescued from an inflatable boat carrying around 110 migrants when it sank off Libya in a separate shipwreck Friday.

Sami said on Sunday that 27 people, including four women, were rescued from that boat sinking.

Survivors had provided harrowing accounts of the tragedy, both UNHCR and IOM said.

“Due to the very bad conditions of the sea, some two hours after the departure the small boat started to take on water,” just a few miles off shore, Sami said in an email.

IOM spokesman in Italy, Flavio Di Giacomo, told AFP on Saturday that the vessel had been “in a very bad state, was taking on water and many people fell into the water and drowned.”

The boat in the end broke into two parts throwing all the passengers into the waves, Sami said.

Sami said the health conditions of several of the survivors were “reportedly serious.”

“Survivors say they lost relatives and friends during the shipwreck,” she said.

The first hint of the tragedy came early Saturday, when Italy's coastguard said an Italian cargo ship had rescued 26 migrants from a flimsy boat sinking off the coast of Libya but voiced fears that dozens more could be missing.

The coastguard received a call from a satellite phone late on Friday that helped locate the stricken inflatable and called on the merchant ship to make a detour to the area about four miles (seven kilometres) off the Libyan coast near Sabratha.

The migrants rescued were transferred to two coastguard vessel and taken to the Italian island of Lampedusa.

Images released by the coastguard showed two women wrapped in shawls and blankets stepping off one of their vessels.

Giacomo said five unaccompanied minors aged between 16 and 17 were among those rescued.

More than 350,000 people fleeing conflict and poverty have reached Italy on boats from Libya since the start of 2014, as Europe struggles to manage its biggest migration crisis since the Second World War.

“We must work together to focus on providing safe routes for people fleeing their homes and seeking sanctuary,” he said in a statement.

More than 1,260 people have already died or gone missing trying to cross the Mediterranean to Europe this year, according to UNHCR numbers.