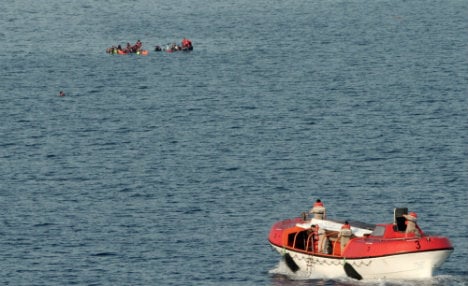 The Italian navy said it is ready to raise the wreck of a migrant boat from the seabed. Photo: Panayitos Tzamaros/AFP

Taking advantage of a period of good weather and calm seas, several military ships will set off for the site on Wednesday and use a specially-designed crane to winch the wreck from its resting place, 380 metres (around 1,245 feet) down.

The migrant boat, carrying as many as 800 people, sank last year after running into a Portuguese freighter which had raced to its rescue, the collision sending its passengers to one side and causing the vessel to tip over. Only 28 people survived.

Fifty bodies were recovered the day of the tragedy, while another 169 have since been brought up from around the wreck by the navy.

Diving and marine company Impresub and heavy lifting specialists Fagioli designed and created a crane-like device with underwater cameras to lift the wreck onto a barge, which will carry it to the Melilli Nato base in Sicily.

Liquid nitrogen will be used throughout to maintain the temperature inside the wreck at between 5 and 10 degrees Celsius.

The wreck will then be placed in a refrigerated tent some 30 meters long, 20 meters wide and 10 meters high, so that work can begin on extracting the bodies. Once empty, the boat will be immediately destroyed, the navy said.

Forensic experts from 20 Italian universities will take part in a project to identify the bodies, with fingerprints, DNA samples and distinguishing body marks collected on file in the hope the data may helping relatives seeking lost loved ones.

The bodies will then be buried in Sicilian cemeteries.

Since the first large-scale migrant wrecks off Lampedusa island in 2013, Italy has been looking at ways to establish the names of all those who perish while fleeing war, poverty or persecution in Africa, the Middle East or South Asia.

But there are no passenger lists on crossings organized by traffickers, documents are quickly destroyed in water and many people are not reported missing because relatives fear repercussions from oppressive governments.