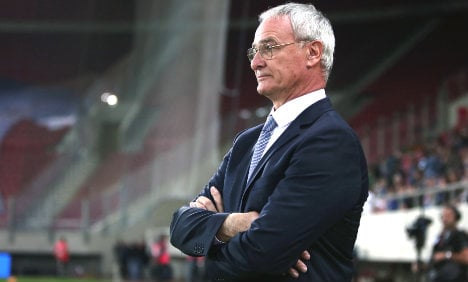 Claudio Ranieri says he would love to one day manage his native Italy. Photo: Angelo Tzoetzinis/AFP

“I would never rule it out. I would love it. And Leicester's blue shirts are already quite similar to those of Italy,” Ranieri said in a Gazzetta dello Sport interview on Tuesday.

As Leicester's fans continue to soak up the club's incredibly title-winning feat, Ranieri's resounding achievement has made the 64-year-old the toast of his native Italy.

On Monday, he was awarded the 'Bearzot Prize' for sporting excellency at the Italian Olympic Committee (CONI) in Rome, following in the footsteps of 2006 World Cup-winning coach Marcello Lippi.

It came amid the presence of Italian football federation (FIGC) president Carlo Tavecchio, who said he wants to see Ranieri steering Italy to a fifth World Cup crown.

After the bittersweet experience as coach of Greece, who sacked him after defeat to the Faroe Islands ended their hopes of qualifying for Euro 2016, Ranieri admitted: “I was curious to know what it would be like to coach a national team, but my experience with Greece was enough. Obviously, being coach of Italy would be different.”

But for the moment, Ranieri is staying put as he believes Leicester's “fairytale of beating the Premier League giants” could be extended to next season's Champions League.

“I know a lot of (European) clubs will be thinking, 'it's okay, it's only Leicester we've got'. But we'll be playing the Champions League with exactly the same attitude.”

Ranieri admitted that while it had been a culture shock in the English midlands he has already curbed the Leicester players' appetite for beer, but struggles to limit their intake of spicy food.

“The beer isn't a problem,” said the Italian when asked if he had had to change his players' eating habits. “They always asked my permission. It was more the food. They love all that spicy stuff.”

And while rejecting the need for players worth “€30-40 million” who could “ruin the dressing room”, the Italian has urged his in-demand stars to remain at the club.

“I know a lot of my players can now go where they want, but I told them that after another year they will have even more experience and they will be worth even more,” said Ranieri.

He added: “I don't want players worth €30-40 million who ruin the atmosphere in the dressing room. I want players with the same kind of attitude as my guys.

Leicester's triumph has drawn comparisons with some of the biggest success stories in world sport, with reports a Hollywood film is already in production.

Italian-American star Robert De Niro has been touted to play Ranieri, who said: “It doesn't matter who plays me. As long as the film is a success, just like we are.”

Ranieri admitted Bocelli, who was blinded permanently aged 12 due to a football accident, told him prior to the game: “I'm feeling very emotional.”

Ranieri added: “His wife told me, 'It's the only time I've seen him (Bocelli) happy to take the plane'.”

Yet despite his success, Ranieri says Leicester's feats fade in comparison with those of Brian Clough's Nottingham Forest.

Ranieri said: “Nottingham Forest was a bigger success story than ours, because they came from the second division, won the league title then two European titles in succession.

“I hope we get to their level in a few years.”