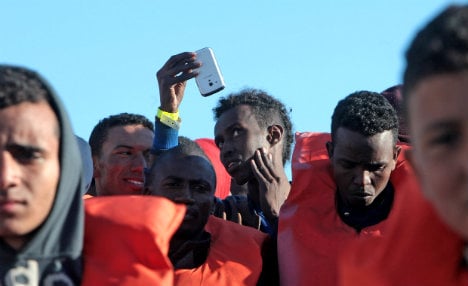 More than 800 refugees have been rescued off the coast of Sicily. Photo: Giovanni Isolino/AFP

It was by far the largest number of Syrian refugees arriving in Italy this year, dwarfing the tiny handful who have so far made it this year on boats from North Africa, suggesting a possible change in tactic as the European Union and Turkey seal off access through Greece and the Balkans.

“This is something new,” said Flavio di Giacomo, spokesman for the International Organization of Migration, telling AFP that of the 31,000 people who have reached Italy this year, only 26 were Syrians. The overwhelming majority were from Africa.

The alarm was raised when a coastguard reconnaissance plane spotted two vessels in difficulty off the southeastern coast of Sicily.

A total of 515 people were rescued from the first boat while around 300 others were taken off the second, the coastguard said.

Of the 342 rescued by the Nave Peluso coastguard vessel, there were “at least 150 Syrian refugees and more than 40 Iraqis” on board, UN refugee agency spokeswoman Carlotta Sami wrote on Twitter.

She said they were expected to reach Augusta port at dawn on Friday.

The full number of Syrians and Iraqis on board will only be known when all of the migrants reach port.

With more than a million people entering Europe last year, countries along the Balkans route began shutting their borders in February, and a month later the EU inked a controversial deal with Ankara under which all migrants arriving on the Greek islands would be sent back to Turkey.

Since the deal took effect in early April, the numbers arriving in Greece have fallen dramatically, raising fears that Italy would soon become the main entry point into Europe.