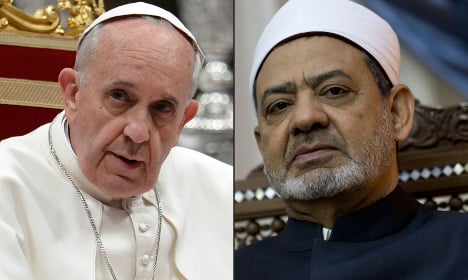 Monday's meeting will be the first between the leader of the world's Catholics and one of Islam's most important clerics. Photo: AFP

Monday's meeting will be the first between the leader of the world's Catholics and one of Islam's most important clerics.

Abbas Shuman, deputy to grand imam Sheikh Ahmed al-Tayeb, told AFP on Sunday that Francis's gestures towards Muslims encouraged Tayeb to meet the pope after falling out with his predecessor Benedict XVI.

“If it were not for these good positions (by Pope Francis) the meeting would not be happening,” Shuman said.

Ties between the Vatican and Al-Azhar, one of Islam's most prestigious centers of learning, soured in 2006 when Benedict delivered a speech interpreted as linking the Muslim Prophet Mohammed to violence.

Relations have steadily improved since Francis became pope in 2013 with inter-faith dialogue near the top of his agenda.

He underlined this improvement in ties with a personal message to the Muslim world to mark the end of the first month of Ramadan during his pontificate.

Shuman said Tayeb will have a message for both the West and Muslims.

Tayeb's visit aims at setting straight the image of “true Islam and to correct misunderstandings created by extremist terrorist groups” in Western countries, he said.

“He encourages countries not to deal with their Muslim citizens as groups that present a threat,” Shuman said.

“And he encourages Muslims in Western society to meld with their societies… it is a message for both sides.”

Pope Francis made headlines in April when he returned from a trip to the migrant crisis island of Lesbos with three Syrian Muslim families who are now being put up by the Vatican as they apply for asylum in Italy.

Church officials say the choice of families was random, but the gesture was nevertheless highlighted by media throughout the Islamic world.