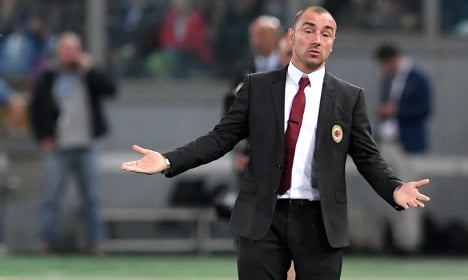 An inspired Milan dominated the Stadio Olimpico clash in Rome but fell to an extra-time winner by late substitute Alvaro Morata, who beat ‘keeper Gianluigi Donnarumma from 10 yards from Juan Cuadrado’s chipped pass to secure a 1-0 victory.

It meant Juventus became the first team in Italy to win the double twice in succession, and the Europa League spot that normally goes to the Cup winner was handed to sixth-placed Sassuolo.

Milan, who had finished two points behind in seventh, will focus on domestic duties next season.

Amid reports the club are set for a takeover by a Chinese consortium, Brocchi says his future, too, is unclear.

“What will be, will be,” Brocchi said. “I haven’t had the chance to speak to the president. I imagine he’ll be disappointed with the defeat, but not with the performance.

“We gave it everything and I am sorry we couldn’t win.”

Probed by media as he left the stadium, Berlusconi gave little away.

“We’ll see,” said Berlusconi, although a complete overhaul could be in the reckoning if Berlusconi sells a majority stake in the club he bought in 1986 and helped steer to five of their seven Champions League titles during their 1990s heyday.

Ironically, it was following the sacking of current Juventus coach Massimiliano Allegri in January 2014 that Milan’s fortunes began slipping.

Allegri, who steered the Rossoneri to their last league title in 2011, has since led Juventus to two successive doubles and a Champions League final, while Milan have appointed no less than four coaches — Clarence Seedorf, Filippo Inzaghi, Sinisa Mihajlovic and now Brocchi — as they bid to stop the rot.

After another forgettable season, fans of the seven-time European champions will be hoping fresh investment can transform the club.

A Chinese consortium is studying the club’s financial records and statements with a view to puchasing a majority stake, having signed exclusive negotiating rights with Berlusconi’s holding company Fininvest earlier this month.

“Fininvest has reached an agreement with a group of Chinese investors in establishing exclusive negotiating rights for the sale of shares of AC Milan,” said a club statement on May 10.

“A memorandum of understanding has also been signed which will act as a starting point for more in depth negotiations to take place.

“The exclusive negotiating rights have been established to be compatible with the complexities of the talks, the needs of the club and the appointments scheduled in the footballing calendar.”