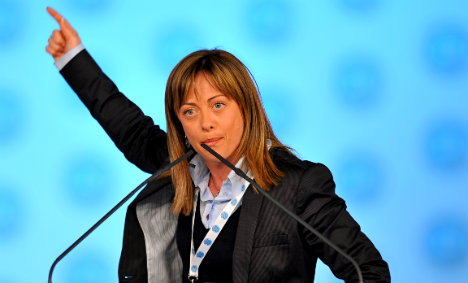 Rome mayor candidate, Giorgia Meloni, has promised to name a Roman road after a noted fascist if she is elected. Photo: Andreas Solaro/AFP

Meloni, from the right-wing Fratelli d'Italia (Brothers of Italy) party, made the pledge at an event to promote her mayoral campaign on Sunday, which also marked the 18th anniversary of the death of fascist journalist and politician, Giorgio Almirante.

“When I'm elected, one of the tasks I want to carry out is to name a road in the city after the man [Almirante] who was fundamental in the history of the Italian right,” Meloni said.

“He was a patriot who believed in democracy and honesty in politics,” she added.

Almirante is a controversial figure. He was a member of Benito Mussolini's National Fascist Party during the war and in 1946 helped found the neo-fascist party, Italian Social Movement (MSI).

Almirante eventually became president of MSI in 1969, a position he held until one year before death in 1988.

The party was renowned for its hostility towards ethnic minorities living in Italy and Meloni's promise of naming a street in his honour quickly drew a backlash from Rome's Jewish community.

“There will never be a street in Rome named after someone who tried to 'defend their race' without regretting it,” tweeted Ruth Dureghello, president of the Jewish Community of Rome.

Meloni, the favoured candidate of far-right parties Brothers of Italy and Northern League, has already hit the headlines in the buildup to the mayoral elections.

Earlier this year Silvio Berlusconi, Italy's ex-premier and leader of Forza Italia, created controversy by saying the pregnant politician should 'focus on being a mum' instead of running for office.

The elections will be held on Sunday June 5th.