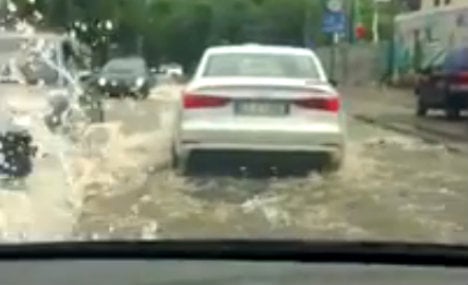 Immediately after the storm began at around 10am some 200 calls were made to emergency services from citizens struggling to cope with the huge volume of rainwater, Ansa reported.

No casualties were recorded during the storm but emergency services were forced into action when more rain fell in a matter of hours than it had throughout the whole of May.

As drains and gutters overflowed, the accident and emergency room of Milan's Policlinico hospital needed to be evacuated.

Staff and students at Pascoloi secondary school were also forced to leave the building after the lashing rain started coming through the roof.

The downpour plunged commuters into chaos by flooding roads and sparking a series of breakdowns on the city's metro system.

Metro Line 5 came to a complete standstill for two hours.

Meanwhile, the intense wind and rain uprooted a tree in Via Ippolito Nievo, taking out power lines as it fell.

The bad weather also plunged one neighbourhood into darkness and blocked traffic to and from the city centre.

The River Lambro, in the east of the city quickly burst its banks amid the downpour, flooding much of Lambro park, which remains under water.

Brief intense storms were forecast throughout the day, with calmer weather expected later on Monday evening.