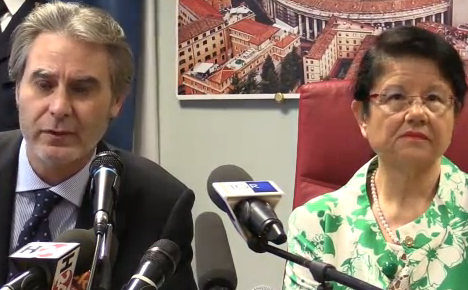 Vincenzo Paduano was arrested for pre-meditated murder after the burning body of 22-year-old Sara Di Pietrantonio was found in the outskirts of Rome by her mother in the early hours of Sunday morning, lying close to a car engulfed by flames.

“I’ve never seen a crime as atrocious as this during the 25 years of doing this job,” Rome Flying Squad chief Luigi Silipo said during a press conference.

Di Pietrantonio, an economics student at Roma Tre University, had left Paduano some time before and had begun a new relationship, Silipo said.

The pair had been together for two years but went through a “violent period” a few months ago.

“He couldn’t accept that she abandoned him,” the prosecutor leading the investigation, Maria Monteleone, said.

“First he set fire to her car, then he chased her and set her alight.”

Paduano, a security guard, allegedly followed Di Pietrantonio home in the early hours of Sunday, ramming his car into the back of hers before dousing the vehicle with a flammable liquid and setting it alight. She was able to escape from the car, but he chased after her. The student is said to have screamed for help from passing motorists, but nobody stopped.

On Saturday night, Di Pietrantonio had dinner with a friend and later went on to a club.

She sent her mother a message at around 3.30am to say she was on her way back after accompanying her friend home. But after she failed to return, her mother and uncle went looking for her

They found the car in flames, and about 500 metres away, in a restaurant car park, was the girl’s burning body.

After questioning friends and family members, police quickly realized that De Pietrantonio had “suffered huge psychological abuse” over the course of the relationship, Silipo said.

“They split up at least three times. Sara recently started a new relationship. He followed her, at least on two occasions, the last of which was fatal.”