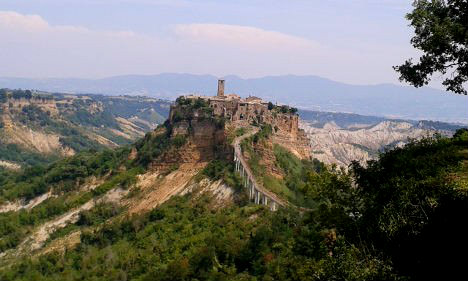 Civita di Bagnoreggio, Lazio, a town of 100 people which is trying to become a tourist attraction. Photo: Angela Giuffrida/The Local

The data came from a dossier compiled by Italy's environmental agency, Legambiente, which was presented to the national councils agency, Anci, on Tuesday.

The figures are stark: Italy is home to some 5,627 towns ,which each have less than 5,000 inhabitants, a massive 2,430 of which are facing a population crisis.

Although small, the towns at risk are currently home to some three million Italians, meaning the issue of ghost towns directly affects more than five percent of Italy's total population.

Over the past 25 years alone, one in seven small town inhabitants – some 675,000 people – have moved elsewhere.

Over the next 25 years, as elderly inhabitants start to pass away and the trends of emigration continue, many will be left almost completely deserted.

Earlier this year, the remote Alpine town of Ostana, in Piedmont ( population: 85 ) celebrated its first birth in 28 years. “The problem is a lack of policies aimed at helping out small, mountain communities like ours,” Ostana Mayor Giacomo Lombardo told The Local. “After all, we are a long way from Rome.”

While the causes of the exodus from small Italian towns are well documented, a solution to the problem is difficult to find.

The phenomenon has its roots in the post-war economic decline of rural Italian communities which saw more and more small-town inhabitants emigrate to major cities. As youngsters left in increasing numbers, birth rates fell way below the rate of replacement and the towns began to empty.

But with time slowly running out to stop many villages falling into ruin, local mayors have been forced to take extreme measures to try and slow the inevitable decline.

Davide Zicchinella, the mayor of Sellia, a town in Calabria, hit the headlines last year after signing a decree forbidding the town's citizens to get sick and die in a bid to keep the town of 573 people (six in 10 of whom are over the aged of 65) going for a few more years.

Zicchinella also opened a free medical centre in Sellia and offered all inhabitants a local tax break if they went for a check-up.

“Half of Sellia's population has left since I went to school 30 years ago,” added the mayor, whose plans to save the town go beyond attempts to cheat the grim reaper.

“Our battle for survival also involves applying for governmental and EU funds so we can carry out works that bring income to the town. Hopefully we can use the increased revenue to improve other services and stop youngsters from leaving,” Ziccinella added.

Sellia has recently built a zip-line above the town, which the mayor hopes will boost visitor numbers this summer.

Many other at-risk towns are also trying to stymie the decline by encouraging tourists to visit.

Civita di Bagnoreggio in Lazio – home to just 100 citizens – has reinvented itself as a tourist attraction, by billing itself as “The Dying Town”.

Visitors are charged €1.50 to enter and admire its deserted streets and the money raised goes towards keeping essential services running.

But even if the worst comes to the worst and a town's population falls to zero, it doesn't mean its doors will close forever.